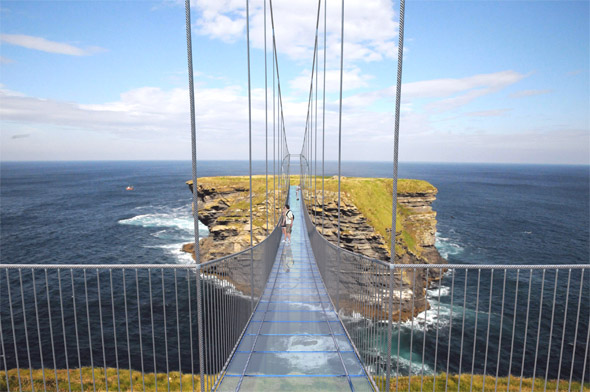 Local Kilkee-based architect Tom Byrne has proposed a new suspension bridge to Bishop’s Island in west Clare. Conceived as a tourist attraction along the lines of the famous Carrick-a-rede bridge in Co. Antrim. it would facilitate access to the currently inaccessible island. The cliff-face adjoining the road is approximately 50 metres above sea level and the island itself 6m lower and, to the nearest part of the island, the span is 117 metres. As a major tourist attraction this structure would be a major addition. Local architect Tom Byrne has designed the bridge in such a way as to traverse the six metres difference in level from land to island in an elegant way affording walkers a gently sloping access to and from the island.

The Carrick-a-rede rope bridge spans a 20m wide chasm with a 23m drop to the sea below. The Bishop’s Island cable suspension bridge would be a much more spectacular with 117 metres wide chasm and 50-metre drop.

The two main trusses, constructed from highly polished 316 stainless steel, are supported via rock-anchors buried deep into the mainland and island. These trusses carry the weight of the bridge via a series of vertical stainless steel cables stretching between them across the chasm. The bridge floor itself is constructed of clear, non-slip, reinforced glass planks affording spectacular views to the sea 50 metres below, panoramic views of the broad Atlantic Ocean beyond, the abundant wildlife and the rugged coast of the Loop Head Peninsula. The bridge is designed to withstand the rigours of Europe’s western-most gales and storms.

Bishop’s Island, near Kilkee on the Loop Head Peninsula in County Clare, has long held a fascination with locals and visitors alike for centuries. It is shrouded in mystery due mainly to its inaccessibility and remoteness but also to the fact that its inhabitants were ascetic monks who used its very remoteness for their chosen lifestyle. There is some conflict as to the date of construction of the ruined buildings on the island. It is argued in an article in Archaeology Ireland magazine of Spring 2005 that they were constructed pre 12th century but most probably no earlier than the 8th. The two remaining ruins consist of a ‘Clochán’ or type of dwelling and the other a Church that is of dry-stone construction similar to the famous Gallerus Oratory in Co. Kerry. One of the more unusual features of the Church is that its east window has a smaller aperture internally rather than externally making it unique in Irish pre-Romanesque architecture. The construction of the buildings on the island represented minor development in ecclesiastical terms and would not have been seen to be at the forefront of architectural or liturgical innovation.

The protected monastic ruins on the island can be examined must more closely than heretofore for the first time by the general visiting public under the strict control and auspices of the Office of Public Works. Ancillary works to the bridge itself would be a car park adjacent to welcoming and ticketing facilities on the opposite side of the road. Strict control systems would be in place to restrict any access to the bridge itself when unmonitored.

The estimated cost of constructing the bridge with the ancillary facilities would be in the order of €1.75m. There is no suggestion in the proposal of any type of ‘interpretative centre’ as Bishop’s Island is so close to the town of Kilkee and it’s amenities.

Living close to the island, Tom admits that “with the downturn I had some time on my hands, and it was an idea that always was there in my head. So I spent some time working on it”. It’s an idea than has been well received by the local councillors. Senior member of Clare County Council Cllr PJ Kelly (FF) has described the proposal “as a fantastic idea and already the tourism development promotion agencies are very much behind the project”.