A towering modernist icon with a colourful past 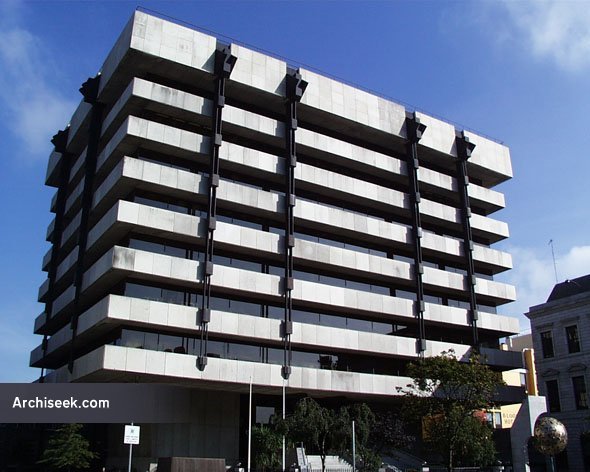 In all the coverage of Ireland’s financial woes, one building nearly always provides the backdrop – the Central Bank on Dublin’s Dame Street. Nine storeys high, with the floors suspended from its roof, it is one of the few modern buildings in Dublin that qualifies to be called “iconic”. Described by architectural historian Christine Casey as “the most emphatic 20th-century architectural presence” on Dublin’s skyline, it was designed by the late Sam Stephenson and was immensely controversial when it was being planned and built in the 1970s.

In a 1999 reader survey by The Irish Times, it was the only building that appeared on people’s “best” and “worst” lists. Fans almost invariably referred to its unique form of construction, while detractors complained about its impact on Dame Street and the Liffey quays.

Not only did its construction require the demolition of a fine assembly of 18th- and 19th-century architecture on Dame Street, eliminating the evocative courtyard of the Commercial Buildings, but it turned out to be nearly 30ft (8.8m) higher than it should have been.

Sam Stephenson responded to the discovery of this flagrant breach of the bank’s planning permission in characteristic style. “Apologetic self-effacement,” he said in 1974, “should be left to public lavatories, VD clinics and the other necessary minutiae of society.”

The outcome was that the bank’s roof trusses were clad in bronze and left exposed – a solution that clearly expressed its muscular, top-down structure. Sadly, this was set aside when the roof was enclosed in the early 1990s at the behest of then governor Maurice Doyle.