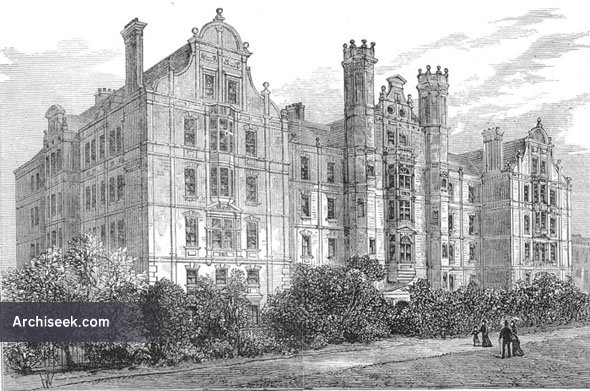 “The Earl of Derby, a fortnight ago, opened the new building added to the hospital for Diseases of the Chest, at Brompton. This new building, which will provide no fewer them 137 additional beds, is entirely apart from the former establishment. It is arranged and finished with every possible means and appliance suggested by modern science to fit it for its work; and it is on such a scale that £10,000 a year additional donations and subscriptions will be necessary to keep it fully occupied. The former hospital, which is divided from the new building by the Fulham-road, has provided 200 beds, which have always been filled, and will continue to be occupied by patients as heretofore. The new hospital is from the design of the late Mr. T. H. Wyatt, and has been carried to completion by his son, Mr. Matthew Wyatt. It is connected with the old building by a tunnel under the Fulham-road. In the basement there are five Turkish and compressed air baths, while the ground floor is devoted to the entrance and offices of the institution. The first, second, and third floors consist of wards for in-patients, while the kitchen is over all, with the necessary accommodation for the nurses and attendants. Great attention has been paid to ventilation, which is managed independently of windows and fireplaces, the warming and ventilation being so combined as to unsure the successful operation of both these important conditions in the treatment of consumption.” Published in The Illustrated London News, July 1, 1882

The building was in an “E” shape and constructed of red brick and Ancaster stone. The basement contained a compressed air room and a Turkish bath[3] (both of which were considered beneficial to tuberculosis sufferers at the time. There were also facilities for a large outpatients department, rooms for resident staff and a lecture room and ten wards holding from 1 to 8 beds. The total cost was said to be £65,976. Now known as the Royal Brompton Hospital, it is now the largest specialist heart and lung centre in the United Kingdom.