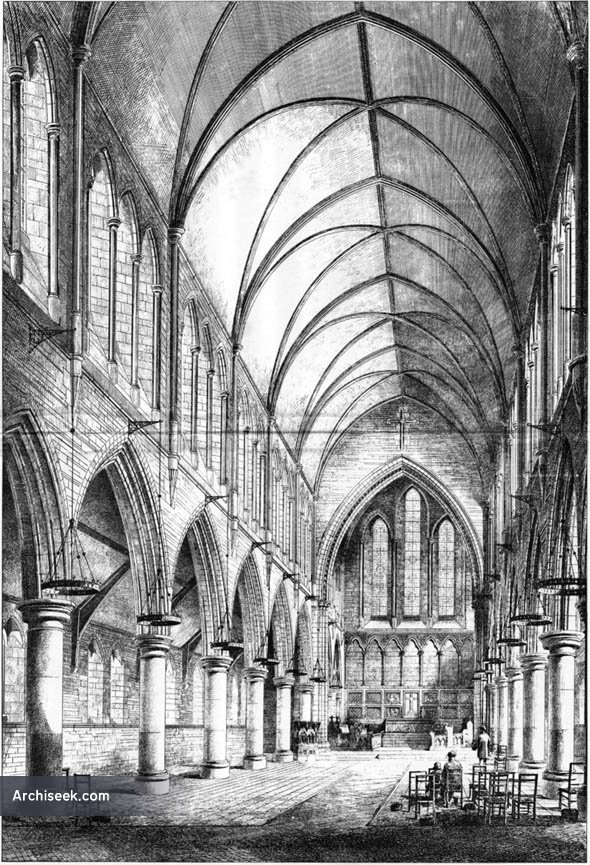 “Our illustration shows the design for the new church which is shortly to take the place of the present unsightly and inconvenient building. The plan shows a nave 103ft. long by 30ft. wide and north and south aisles 13ft. 6in. wide : entrance porches at the west end, and doors for exit at the east end of the aisles. A large baptistry at the west end of the nave is a prominent feature of the design. The chancel, 42ft. long and 30ft. wide, has accommodation for a choir of fifty. Proper exits for communicants are provided by means of choir aisles.

The tower at the north-east angle of the building is 127ft. in height from ground to top of parapet, and 153ft. to top of pinnacles, and is well placed with regard to the site. The lower stage forms a clergy vestry 16ft. by 15ft. The choir vestry, 33ft. 9in. by 13ft. 6in., is placed at the east end of the chancel, and communicates with clergy vestry, and with organchamber in south aisle of chancel — a very convenient arrangement, and the only one which could be adopted without any interference with graves — a matter which has evidently been carefully considered. This church will accommodate, on fixed benches, 1,012 adults, but, by chairs and sliding seats for occasional use, this number may be increased to 1,220. With regard to the erection of the new building, it is proposed that the tower of the existing church be first pulled down, and the nave and its aisles, &c., then butt westward, leaving the rest of the present church up for use till this part be completed, after which the old church will be pulled down and the new chancel, with its aisles and vestries (including lower stage of the tower), will then be built. The proposed outlay on these portions of the structure is £1.5,000, but it is estimated that about £.5,000 more will be required to complete the building. For so large and important a parish-church this is certainly not an extravagant sum. The ground-plan seems in all respects carefully studied, and very conveniently arranged, and the exterior and interior both show a considerable amount of quiet dignity derived from well-considered proportions rather than from anything like fussiness or pretentious ornamentation. Mr. John P. Seddon and Mr. Hugh Gough, of Queen Anne’s Gate, are associated in this matter as joint architects.” Illustration published in The Building News, August 27th 1880.