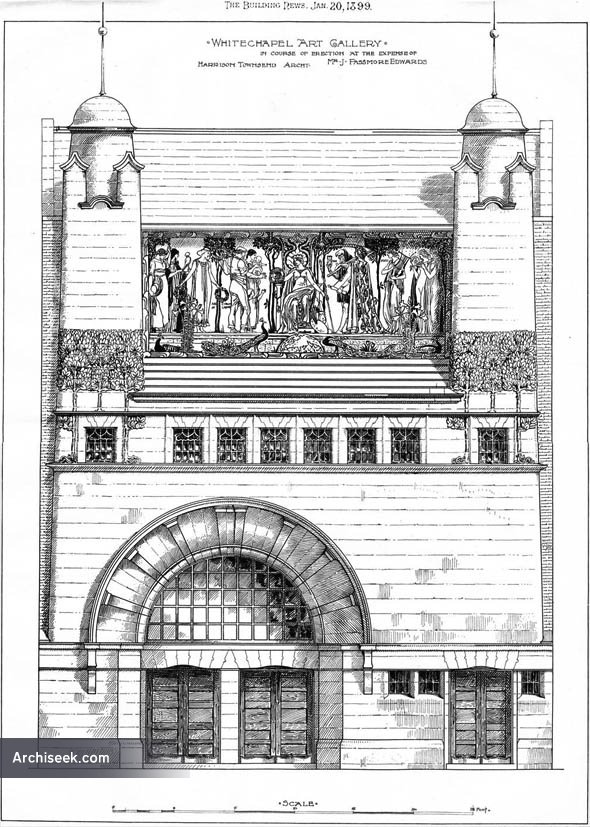 Harrison Townsend was a founder member of the Arts Workers Guild, and a enthusiast for the work of Richardson in the United States, although his own work was decidedly English Arts & Crafts in style. The gallery has a monumental mass and solidity, with a large Richardson-inspired doorway which was to have been offset by a stone frieze. Sadly, it never received the frieze designed by Walter Crane, and illustrated above.

“WE publish the elevation and plans of the new picture gallery at Whitechapel which is in course of erection at the cost of Mr. J. Passmore Edwards, who was also the donor of the adjoining building, the Whitechapel Free Library. The site, surrounded as it is by other property, offered difficulties in the way of efficiently lighting the ground-floor gallery. These the architect endeavoured to overcome by an arrangement of plan somewhat on the lines of a church, the “aisles” being entirely top-lighted. Accommodation will be found to hang, with ample spacing, 450 pictures. The ground-floor hall will be so arranged as to allow it to be let for meetings when the loan exhibitions (of which it is intended to hold three or four a year) are not being held. The material for the facade towards the High-street will be a soft-coloured terracotta. The mosaic, which forms the dominant feature of the design, has been designed by Mr. AValter Crane, and is of a size unusual in exterior decorative work, being 25ft. long and 20ft. high. By the omission of the use of gold (the weak point in mosaics ex- posed to the weather), there is reason to believe in the permanence of the work. The architect is Mr. C. Harrison Townsend, F.R.I.B.A.”