1875 – Board of Works Offices, Greenwich, London 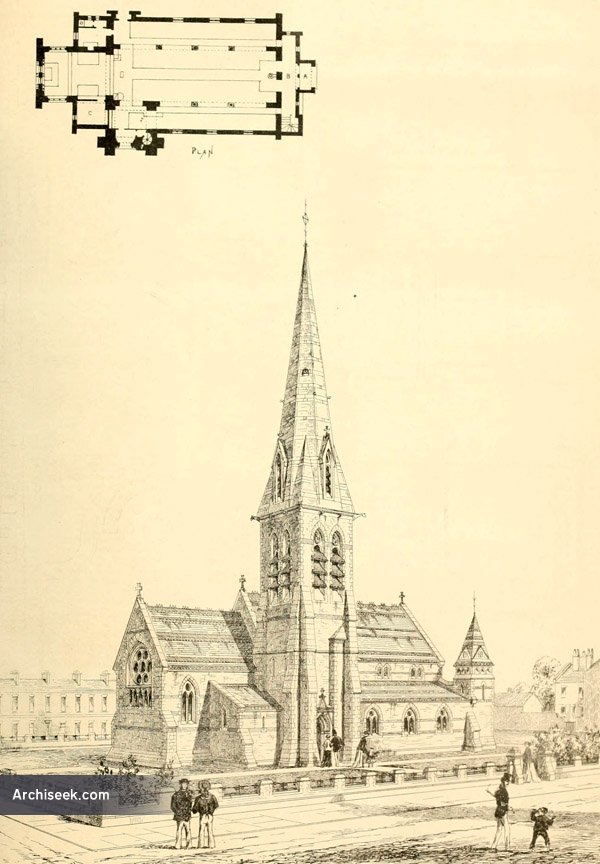 St Luke’s Church, Miilwall (in the Isle of Dogs) was bombed out during the Second World War. Since then the community has carried on with a make-shift chapel, tacked on to the church hall.

From The Building News, November 6 1868: “THE new Church of St. Luke, Millwall, of I which we give a view and plan in our present number, is the development or rather fructification of the work of the Mission established in the district of the parish of Poplar, and which has been in operation for the last three years with the most beneficial results. Hitherto the services of the Church have been performed in a temporary building situate in the West Ferry-road. This will presently be superseded by the new and permanent church now in course of erection on a site adjacent, given by the Lady Margaret Charteris. That lady has further assisted the work by a liberal money contribution, in which she has been followed by many other well-wishers to the undertaking.

The new church, which is from the designs of Mr. E. L. Blackburne, architect, of Bernard-street, Russell-square, is calculated to afford accommodation for 600 adults, all upon its floor space. Its style is an early phase of the Pointed Gothic. Its plan comprises a chancel, having a vestry with porch, &c., on the south side, and an organ room on the north, respectively marked D and C on the plan ; a nave and north and south aisles, with tower and spire at the east end of the former; and an ambulatory and porch at the western end, marked in like manner B and A on the plan The materials employed are Kentish rag stone random-laid, with coursed bandings of the same for the exterior face of the walling, and stock brick, relieved by yellow malms and white Suffolk bricks in the arches and stringcourses, &c., for the interior. The freestone work for doors, windows, nave columns, and arcades, &c., will be the best Bath and Ancaster stone. The roofs and other portions of the timber work will be clean deal, varnished. ‘The seating and other similar furniture will also be of clean deal, varnished. The pulpit and reredos will be of stone, the font, of course, the same. The floor of the chancel will be paved with ornamental tiles, as will also the nave and aisle passages, &c. Such parts of the area as are covered by the seats will be boarded. The windows will be glazed with tinted cathedral glass in quarry patterns. The roofs will be slated, and the ridge finished with an ornamental cresting in tile. Mr. Howard, of King-street, Covent Garden, is the contractor for the whole of the works.”