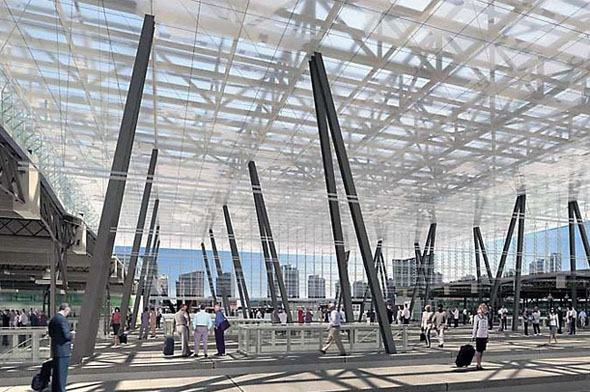 Most GO commuters hopping a train at Union Station wouldn’t recognize the blackened, leaky roof over the platforms as a Canadian architectural jewel. But on Monday, GO Transit begins the mammoth task of transforming one of the city’s gloomiest spaces into a light-filled, 21st-century terminus, while preserving the designated heritage features of the 1929 train shed. The trick will be getting the work done – including construction of a floating glass atrium and green roof features – while keeping commuters on the move. The makeover will be carried out in 13 stages, phased over five years – at a time when 25 per cent more commuters are expected to use the station, said Mike Wolczyk, director of Union Station Infrastructure.

In Phase 1, hoarding will be installed along the south end of the 2.8-hectare shed, which stretches from York St. to Bay St., covering GO platform 24 and VIA platform 21. It will take about a month just to install that much hoarding, but work on that section of the roof should be complete by fall.Meantime, some GO commuters will see minor changes in their usual platforms. The first to be affected will be those on the five morning trains that arrive on platforms 25 and 26.