Throwing the world a few curves 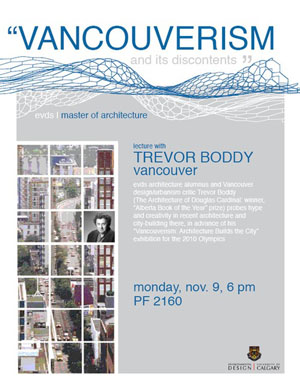 When tens of thousands of Olympic visitors arrive in this city next month, they’re likely to come with stories about the glories of “Vancouverism” ringing in their ears. The media often focus on Vancouver’s unique forays into building the city, with its dense collections of glass towers set amid parks, seawall walks, social housing and Jetsons-esque monorail transit. And with the approach of the 2010 Winter Games, that interest has accelerated. The Los Angeles Times had a story on the topic just last week.

But one local architecture critic has developed an entire exhibit on Vancouverism, and he’s ready to show visitors what he believes is truly original about Vancouver’s urban experiments. Trevor Boddy, whose exhibit opened Friday in the atrium of a building that exemplifies the best of Vancouverism – Woodward’s, says it’s not what you may think. And it’s not the glass towers or the seawalls.

“There are some things we do that no one else does,” says Mr. Boddy, who took a smaller version of the current show to London in the summer of 2008 and Paris in the winter of 2008-09. “We have density, but it’s not just ‘how high does it go.’ It’s the density and complexity of use. The hyper-example is Woodward’s itself.”