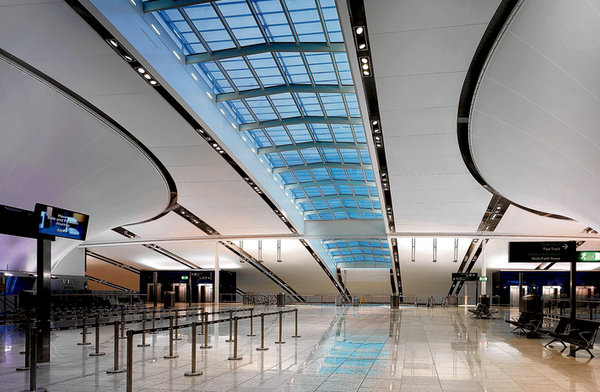 Everyone who knows Dublin airport and its dilapidated and often chaotic main terminal will be delighted and surprised by Terminal 2. Except for the views out towards Howth and Ballymun and, indeed, a glimpse of the unloved Terminal 1, it is like being in another country. Externally, the sweeping curves of the new terminal suggest a swaggering symbol of boom-time Ireland, which is when this mammoth project was conceived. Internally, it is bright, elegant, streamlined, and – above all – characterised by an almost incredible sense of space.

Just as the endless changes of levels on arrival in Terminal 1 – going downstairs, then upstairs and then down again to the oppressive baggage hall – offered a preview of the country’s chaos, Terminal 2 conveys an entirely different impression of how Ireland is organised. After a single change in level, it’s straight through all the way to the exit – via a baggage hall with half-a-dozen huge carousels, some big enough to cater for two long-haul flights at a time, under a wavy white-panelled ceiling set high enough to avoid being oppressive.

Unusually, arriving passengers share the same space as those checking in at Terminal 2 after they emerge from the customs hall. This is a vast single volume, contained in the emblematic “toroid” form of the entrance/exit zone – geometrically derived from a doughnut. Alan Lamond, one of the directors of airport architects Pascall and Watson, believes the mixing of arriving and departing passengers in a major terminal is “almost unique”, and says it was intended to allow new arrivals to experience the spatial drama of Terminal 2’s toroid.