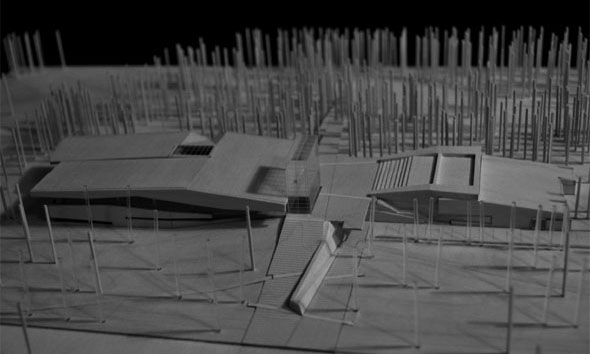 “Not only are our libraries key sites that enhance neighbourhood life for Montrealers, they play an essential role in strengthening Montréal as a city of knowledge and culture,” stated Mr. Tremblay, Mayor of Montréal. “And while we have focused over the last few years on making our libraries more accessible and enriching their holdings, we also know that the quality of our libraries’ architecture plays a crucial role in ensuring that Montrealers take pride in using them.”

The jury statement on the winning design – “The proposal has a distinctive contemporary signature, and the footbridge offers a new relationship between the city and the woodland. The concept meets the vision described in the program: human, multifaceted, and green. The concept generates spatial, social and urban experiences. The project meets the challenges posed by the site and the functional program efficiently; through its imposing overall volume, the project demonstrates the will to be visible and to contribute to the consolidation of Boulevard Thimens as a civic axis. The location of the entranceway gives priority to pedestrians while solving the siting of the parking lot. The organization of the interior space is functional and responds imaginatively to the programmatic requirements; it fosters a relaxed environment conducive to reading. The ceiling’s wood treatment helps to accentuate the relationship between the building’s interior and the woodland. The project’s sustainable development concept is innovative, clear and educational; the building’s solar orientation is well thought out”.

In compliance with Montréal’s policy on sustainable development for municipal buildings, the project is aiming to obtain LEED “Gold” certification (Leadership in Energy and Environmental Design). A true cultural gathering place, the new building will include, in addition to the library, an exhibition space as well as the Musée des maà®tres et artisans du Québec’s collection conservation centre. The building will consolidate the role of the Boulevard Thimens civic axis and also help enhance the value of the Parc Marcel-Laurin woodland by providing it with a new point of entry.

The winning team, for its part, stated: “The new Saint-Laurent library is a place where users will feel a sense of ownership””of knowledge, of culture, of the site itself””as well as discovery. This isn’t a project about architecture alone: it’s also about landscape. Located between Boulevard Thimens and Parc Marcel-Laurin, the new library integrates into the site by drawing on the major elements of the park. As such, the building connects the city with the surrounding landscape, and serves as a point of connection that allows users to explore its site””inside and outside, from Boulevard Thimens as well as from the park. Visitors will discover the building by approaching it from a variety of spaces both intimate and dramatic, spaces that, by offering a variety of access pathways, set the stage for the site as well as for its users.”

The winning project will be presented to the general public at an information session at the Centre des loisirs de Saint-Laurent on February 15, 2010, at 7 p.m. Until then, drawings of the winning project as well as those of the three other finalists can be viewed on the website dedicated to the new library at: http://bibliotheque.saintlaurent.ville.montreal.qc.ca/home.html.

According to the established schedule, the winning firm will develop the plans and specifications for the new building throughout 2010. Construction will begin in 2011 and continue into 2012. The building is slated to open at the end of 2012.