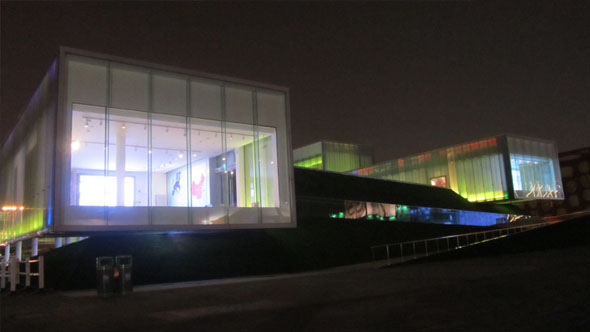 It’s a fair hike to get to Ireland’s pale and beautiful Expo pavilion in Shanghai, so be prepared to walk if you are lucky enough to visit the World’s Fair. To get to Ireland’s pavilion, just go past the Greece and Iceland pavilion, they’re right beside each other. In China, everyone is moaning about Expo, saying it’s too expensive, a bit meaningless, and why should we go anyway. The Communists are trying to stop this kind of dissenting talk. But they would do well to allow a situation find its own level. Because Expo is actually really cool.

And, fears of contagious economic collapse aside, Ireland’s contribution to this world fair is a real success, something that is beautiful now and will grow over the six months of the Expo period. The show is all visual, with relatively little textual input, and it works well. And you come out at the end to a collage of Irish images. These, incidentally, could go either way – invest in Ireland, or find somewhere less frantic.

Back in November, the Irish pavilion was just a girder atop another girder, and one had to raise an eyebrow when a clearly competent Hong Kong engineer said: “It’s going to be amazing.”

He was right. So was architect Michael Bradley, and deputy commissioner John Lynam. They all said it would work, and they were right. The €8 million, which looked like a pile of money back in 2008, but is now nothing compared to the whole banking debacle, has been well-spent.