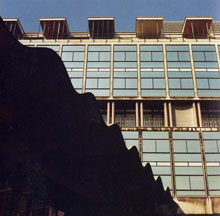 DOCOMOMO Ireland will be officially re-launched at Busáras on the afternoon of Thursday, July 8th, 2010. DOCOMOMO Ireland succeeds and replaces the Irish DOCOMOMO Working Party, established in 1991. DOCOMOMO is an international organization, founded at Eindhoven in The Netherlands in 1990, committed to the documentation and conservation of buildings, sites and neighbourhoods of the modern movement.

DOCOMOMO Ireland aims to: foster interest in the ideas and heritage of the modern movement in Ireland exchange knowledge relating to conservation technology, history and education elicit responsibility towards this recent architectural inheritance and act as a watchdog when important Irish modern movement buildings and sites are threatened

Members are also invited to put their names forward for election to the committee for the coming year, to serve either as committee members (7 vacancies) or as officers (Chair, Secretary, Treasurer) on the committee of 10. Prospective committee members should attach their personal expression of interest to their membership application. There is no need for a seconder.

The deadline for receipt of membership applications and expressions of interest to stand for election is 12 noon on Thursday, June 24th, 2010. Only those who have applied for membership by that date will be eligible to vote in the election. Only members may attend the relaunch at Busáras, when details of upcoming events will be announced.