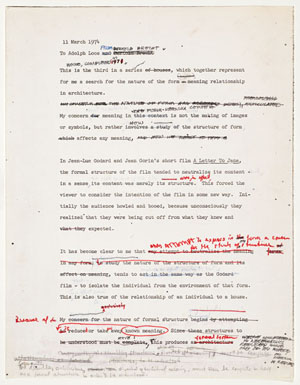 From 4 February until 30 May 2010, the Canadian Centre for Architecture (CCA) presents the exhibition Take Note, which traces selected pivotal moments in the ongoing relationship between writing and architecture over the past fifty years. Take Note is the fifth in a series of CCA exhibitions developed in collaboration with universities. Take Note is the result of a research seminar led by Sylvia Lavin in the Department of Architecture and Urban Design at the University of California at Los Angeles (UCLA).

Mirko Zardini, Director and Chief Curator of the CCA comments: “Take Note concludes the first phase in a series of CCA exhibitions developed in collaboration with universities. It reflects the CCA’s mandate as an international research centre that initiates close partnerships with academic and cultural institutions This research and exhibition are of crucial importance at a time when we are reexamining the role of architecture within a changing society and environment. Sylvia Lavin and her group have done some incredible work in bringing to our attention the different ways the intellectual dimension of architecture is taking form.”

Presented in the CCA’s Octagonal Gallery and seven Hall Cases, the exhibition explores the intellectual dimension of architecture, specifically the ways in which architects visualise their ideas and transcribe them in their notes, producing writings that contribute to cultural advancement and transform architecture by tying it to developments in various spheres. The exhibition includes nearly 80 objects from the CCA Collection and archives, representing 18 artists and architects, including Gordon Matta-Clark and John Hejduk, and significant contemporary architecture firms such as Gehry Partners, Greg Lynn FORM, Diller Scofidio + Renfro, Stan Allen Architect, Bernard Tschumi, and Reiser+ Umemoto RUR Architecture.

In the 1960s, architects pursued ways of establishing a counterculture by opposing dominant habits of the profession – writing instead of building, writing as a form of drawing, and reading as a way of understanding. According to Take Note curator Sylvia Lavin, “a small oppositional element in architecture forged its own counterculture by turning its energies away from building toward writing. In its hands, the page became a site for design and texts became architectural works in their own right. Born of a desire to foreground the intellectual dimension of architecture by associating it with developments in conceptual art, linguistics, and philosophy, this turn toward writing soon engaged architecture with broader questions of pop culture, mass media, advertising, and emerging technologies, setting in motion a fundamental transformation of the discipline whose momentum remains unabated to this day. Take Note offers an album of snapshots of key episodes in that transformation.”

With outlines echoing the contours of the works on display, the CCA-designed exhibition installation draws an imaginary line symbolising the logic of the architects and highlighting their theoretical discourse, posted above each object. The central essay, presented in the Octagonal Gallery, is anchored to seven points of reference, representing the seven architects whose related documents (essays, photographs, animated objects, posters and booklets) are cross-referenced in the display cases using footnote numbers. Two multimedia animations introduce the exhibition’s spatial theme and concept, designed by the American production and animation company Imaginary Forces, well known for frequent collaboration with architects.