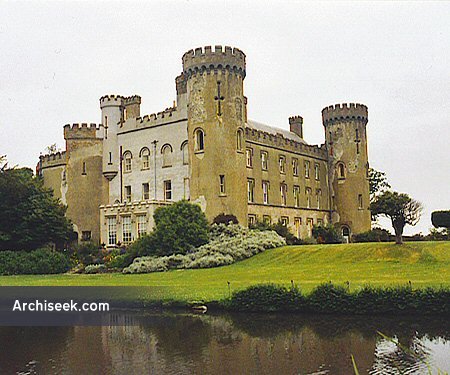 Originally the site of a medieval Castle of the Pale, it was enlarged in the mid 18th century into a Georgian residence. At this stage it was a plain 3 storey, 7 bay double gable-ended house. In 1839 it was enlarged and castellated to the designs of either John B. Keane or Thomas Smith. What was formerly the entrance front, gained two corner round towers and became the garden front. To one end of the side elevation, a new entrance was created with a romanesque arch and a square entrance tower, which acted as a porte cochère. On the other side, a long wing with turrets and castellation was added to create a courtyard. The original Georgian façade is still very obvious, especially on the garden front (above). The interior is intact Georgian with fine plasterwork and a staircase. One of the upstairs rooms features Masonic emblems and was built for the purpose of lodge meetings.