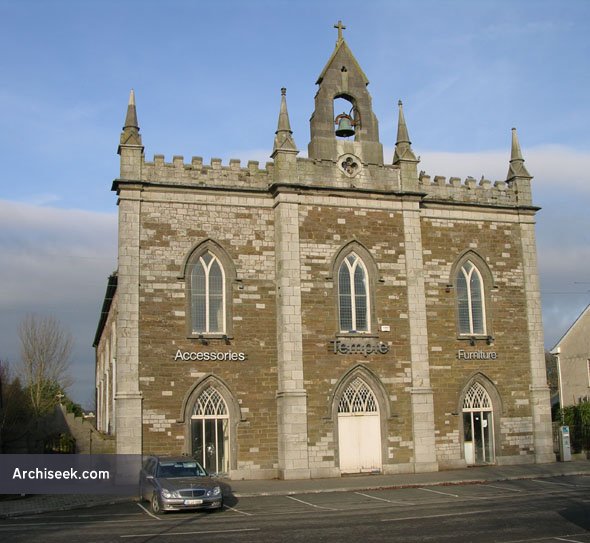 Now a furniture store, the former Catholic church is a simple structure externally with few architectural pretensions. It was one of the earliest churches to be completed in the post-Emancipation period. Heavily remodeled internally in the 1860s, the interior was fantastic, most of the decoration now gone.

A description in The Irish Builder goes to some length in describing the new decorative work. “The dedication of the Church of St. Mary, Ardee, took place on the 3rd inst. The additions to the building, which have in a great measure re-modelled it, are intended as a memorial to the late Canon Levins, the former parish priest, who died in 1863. The church is 135 ft. in length, and consists of nave, aisles separated from the nave by piers and arches, and a chancel, with side chapels, which are the additions recently made. The chancel, the altar which stands within it, the stained glass windows, and the decorations in all their details, are in the style of the fifteenth century.

As the ground falls towards the chancel or east end of the church, this facility for constructing a crypt was availed of, and in the large crypt furnished with an altar now lie the remains of the priest to honour whose memory these works were designed. A series of six steps leads up from the floor of the nave to the chancel, which is 26 feet wide by 26 feet in length. Over the altar is a five-light stained window, and on the north and south sides are two-light windows also of stained glass. The ceiling is divided into panels, and decorated. The fitting up and embellishment of the chancel with the altar, stained glass, metal- work, &c., reflect credit upon the Irish talent and taste, both in designing and workmanship, which were exerted here by the staff of Messrs. Earley and Powells, of this city, by whom the works were executed, under the superintendence of Mr. J.J. M’Carthy, architect. The altar and reredos are of Caen stone, and inlaid with various coloured marbles. On the frontal of the altar appears a well designed group, the subject being the Last Supper, and, in panels at the side, the symbolic wheat and grapes. ‘I’he table of the altar is supported on red marble shafts, with beautifully moulded bases and elaborately carved capitals. The reredos is divided longitudinally into seven compartments. In the central space, under a richly carved canopy, is a sculptured group of the Adoration of the Lamb. In the two compartments on both sides of the centre are groups of the four sacrifices of the old law—Abel, Noah, Abraham and Isaac, and Melchisedec. They are also overhung by rich and elaborate tabernacle work. At the extremities of the reredos are nobly sculptured figures, nearly life size, representing the Synagogue on the Epistle side, and the Christian Church on the Gospel side. They stand on pedestals of green marble and are surmounted by open and carved canopy work carried up to a considerable height. Immediately over the reredos and apparently springing from and forming part of it, is a five-light mullioned and traceried window filled with stained glass, which for purity of design and conception of the subjects forming it, and for harmony of colours, has not been surpassed since the revival of glass painting in latter times. The subjects are taken from the life of St. John the Baptist, the patron saint of the venerated priest whose memory is to be held in remembrance.

The central group is the baptism of Our Lord in the Jordan by St. John. In the extreme compartment on the Gospel side the subject is the angel announcing to Zachariah that ” a son shall be born unto him.” The next compartment contains the Holy Family, consisting of the Blessed Virgin, with Our Lord, St. John the Baptist, St. Joseph, and St. Anne. The compartment next the centre on the Epistle side, contains the Preaching of St. John in the Wilderness, and the extreme space on the Epistle side contains the Decollation of St. John. The floor of the chancel is an elaborately decorated monumental cross, indicating the exact position of the grave of Canon Levins in the crypt underneath. The floor of the chancel is laid with encaustic tiles. The altar railing is of wrought iron, and divided into panels, in the centre of each of which are monograms of the holy name, and representations of the chalice and host alternately with the monograms, while all these are encircled with shamrocks. The walls are coloured deep niarone and powdered with gilt floriated crosses, and at the jambs and splays of the windows are coloured borders. Amongst the decorations of the ceiling are to be seen numerous devices of the Passion, and also monograms of the Holy Name. The pulpit, which is of a semi-octagon shape, in the Gothic style, was by Mr. Joseph Digges, of Lincoln-place, Dublin. This pulpit, with its neat stairs, &c., is constructed on a movable platform base, with invisible rollers underneath, which enables the entire structure to be easily removed aside when not required.” The Dublin Builder, June 15 1866.