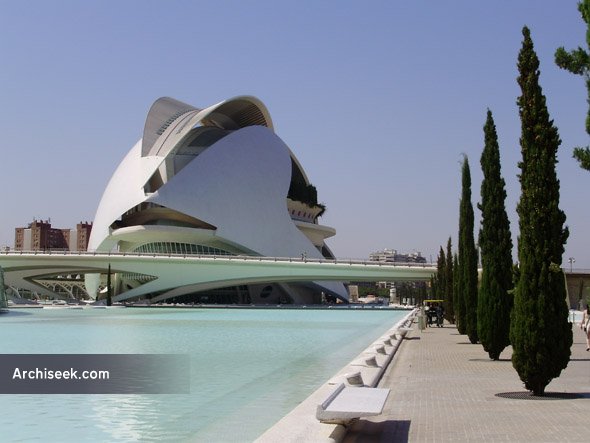 Queen Sophia Palace of the Arts is the final structure built of a grand City of Arts and Sciences concept designed by the Valencia-born and internationally known architect, Santiago Calatrava, which began in 1995 and it was opened on 8 October 2005. The building is designed with a dual intention: that of acting as a multi-hall auditorium and also forming an urban landmark. It is used as an opera house, dance and music theatre.

Under the expansive curved-roof structure, 230 metres in length, the building rises fourteen stories and includes three stories below ground. The 40,000 sq. metre building contains four auditoriums of various sizes. The roof or “˜plume’ is the most structurally spectacular feature of the building, while the two “˜shells’ which embrace the building on the outside are made of laminated steel with an approximate weight of 3,000 tons and feature delicate ceramic work (trencadís) on the outside.