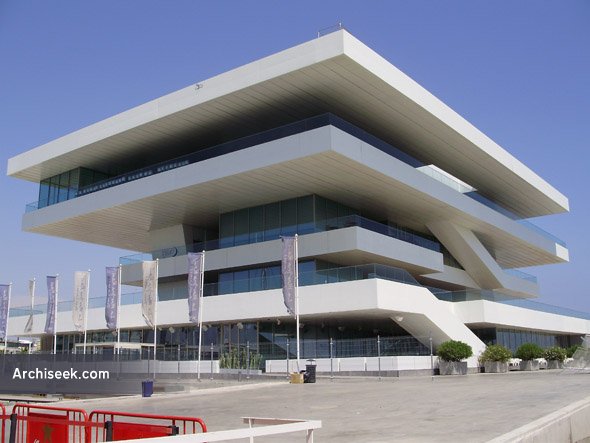 The building and park were the social focal point for the 2007 America’s Cup. The building “Veles e Vents” – Sails and Winds – was completed within 11 months of winning the competition in June 2005. A “tail” of elevated public spectator decks stretches out from the building into the port, with bars, restaurants, and information points. The decks overlook a newly excavated canal that links the port to the offshore racing courses. To the north, a new 100,000 square metre park links the city to the new seafront. The 10,000 square metre, four-floor concrete building is composed of a series of stacked and shifting horizontal planes that provide shade and uninterrupted views extending out to sea. Cantilevered floor slabs create the outdoor viewing decks that surround each floor. 60 percent of the building is taken up by outdoor space.

The architect ” the brief was to build something exciting where people could congregate to watch the racing. So the idea of using the building to create shaded platforms was important. It has to be place where you can stand outside as much as inside. You’re here to look out at sea and that’s where I put the emphasis. You’re continuously aware of the long view to the sea and on the other side the view into the port.”