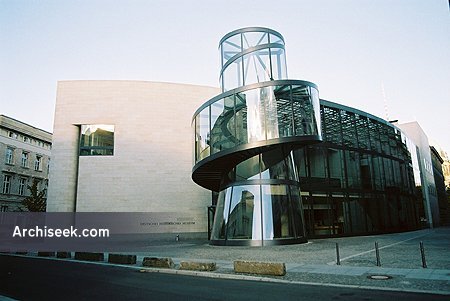 Prior to reunification, Chancellor, Helmut Kohl decided to present Berlin with a new history museum. It was to be built on the bend of the River Spree opposite the Reichstag Building, and an international competition was held to find an architect. The winner was Aldo Rossi. After reunification, the land was needed for the new Chancellery, but one of the museums of the old GDR was the baroque former “Zeughaus” (Arsenal) on Unter den Linden.

Since this historic building was much smaller than Rossi’s design, Christoph Stölzl, the museum’s director at the time, persuaded the Chancellor to agree to a new wing commissioned personally from the distinguished American architect Ieoh Ming Pei.

It is not exactly a prime site, behind the Zeughaus, and on a short cut between the Neuer Wache and the Pergamon Museum. The new building attracts the passer-by with a spectacular architectural gesture, a staircase shaped as a monumental glass cylinder, in which walking from one floor to another means taking part in a piece of “urban theatre”. The dynamic staircase and the foyer’s adjoining curved glass façade, which rises the full height of the building, form a counterpoint to the statuesque walls constructed of French limestone with a pale yellow sheen.