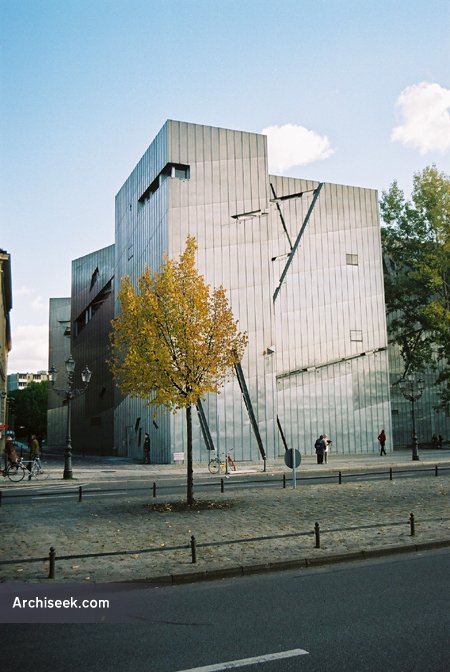 The Jewish Museum Berlin (Jüdisches Museum Berlin) covers two millennia of German Jewish history. It consists of two buildings, one the old Kollegienhaus, a former courthouse, built in the 18th century; the other, a new addition specifically built for the museum, designed Daniel Libeskind.

In 1989, the Berlin government announced an anonymous competition for the new museum’s design. A year later, Daniel Libeskind’s design was chosen for the commission for what was then planned as a “Jewish Department” for the Berlin Museum. While other entrants proposed cool, neutral spaces, Libeskind offered a radical, zigzag design, which earned the nickname “Blitz.” When in July 3, 1991, the Senate of Berlin voted to scrap the Jewish Museum, the Libeskinds alerted the international press. Influential political and cultural figures expressed their support for the museum. Due to these pressures, in October 1991, the Parliament of Berlin overruled the Senate and work on the Jewish Museum continued.

Construction on the new extension to the Berlin Museum began in November 1992. The empty museum was completed in 1999 and attracted over 350,000 people before it was filled and opened on September 11, 2001. The Museum itself, consisting of about 161,000 square feet is a twisted zig-zag and is accessible only via an underground passage from the Berlin Museum’s baroque wing.

A “Void,” an empty space about 66 feet tall, slices linearly through the entire building. Menashe Kadishman’s Shalechet (Fallen leaves) installation fills the void with 10,000 coarse iron faces. An irregular matrix of windows cuts in all orientations across the building’s facade. A thin layer of zinc coats the building’s exterior, which will oxidize and turn bluish as it weathers.

A second underground tunnel connects the Museum proper to the E.T.A. Hoffmann Garden, or The Garden of Exile, whose foundation is tilted. The Garden’s oleaster grows out of reach, atop 49 tall pillars. The final underground tunnel leads from the Museum to the Holocaust Tower, a 79 foot (24 m) tall empty silo. The bare concrete Tower is neither heated nor cooled, and its only light comes from a small slit in its roof.

Similar to Libeskind’s first building, the Felix Nussbaum Haus, the museum consists of three spaces. All three of the underground tunnels, or “axes,” intersect and may represent the connection between the three realities of Jewish life in Germany, as symbolized by each of the three spaces: Continuity with German history, Emigration from Germany, and the Holocaust.