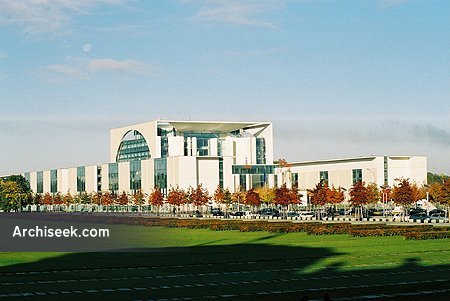 The Federal Chancellery stands at the western end of the “Bundesband”, the strip of federal buildings that stretches across the bend in the River Spree to form a symbolic link between East and West. Following the transfer of the government from Bonn to Berlin the Federal Chancellery was temporarily accommodated in the former GDR Council of State building. The Chancellor took up official residence in the new building on 30 April 2001. Roughly comparable in function to the American White House, it is the second most important government building in the reunited capital city. Only the Reichstag – recently refurbished by Foster and Partners for the German parliament–can claim symbolic precedence.

Axel Schultes and Charlotte Frank planned both the urban setting and the architecture of the new Federal Chancellery. In 1992, they won the urban development competition for the government precinct and in 1994, the realization competition for the Federal Chancellery. Design alterations during construction caused the budget to almost double, from $120 to $220 million.

The nine-storey, 36-metre tall executive building is the centrepiece of the complex. It is flanked to the north and south by two regularly structured, five-storey administrative wings, each of which has 13 large conservatories.

Chancellor Schröder has dubbed the building an “oversize washing machine,”. His main complaint however is that the building is impractical because despite its enormous size, it provides little room for his immediate staff. His personal secretary works on another floor due to lack of space near his office. Other officials think their suites are too small–they call them “chicken coops.”