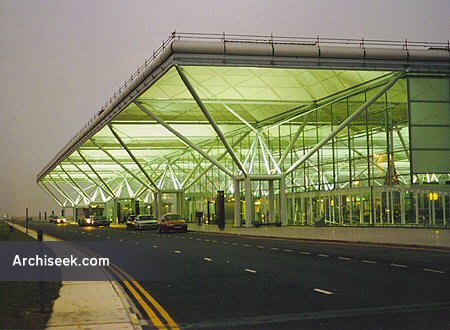 Stansted, which opened in 1991, challenged all the accepted rules of airport design. It went back to the roots of modern air travel and literally stood conventional wisdom on its head. Early airport terminals were very simple: on one side there was a road and on the other a field where aircraft landed into the wind. The progression from landside to airside was a simple walk from your car, through the terminal to your plane, which was always in view. In contrast to most contemporary airports, there were no orientation problems. Stansted was an attempt to recapture the clarity of those early airfields, together with some of the lost romance of air travel. Allied to that were strong environmental imperatives: the building had to be discreet in its rural setting and energy efficient.

From the traveller’s point of view, movement through the building is simple and direct. Stansted has none of the level changes that disfigure most airports. Passengers proceed in a fluid movement from the set-down point to the check-in area, passport control and on to the departure lounges, where they can see the planes. From there, an automatic tracked transit system takes them to satellite buildings to board their aircraft.

All service distribution systems are contained within the ‘trunks’ of structural ‘trees’ which rise up from the undercroft through the main concourse floor. These trees support a lightweight roof which is freed simply to keep out rain and let in light. The concourse is entirely daylit on all but the most overcast of days. The constantly changing daylight gives the interior space a poetic dimension and also has significant energy and economic advantages – running costs are half those of any other British terminal.

This degree of clarity was achieved by turning the building ‘upside down’, banishing the heavy environmental service installations usually found at roof level to an undercroft that runs beneath the entire concourse floor. The undercroft also contains baggage handling and was able to accommodate a mainline railway station which was integrated into the building at a late stage.