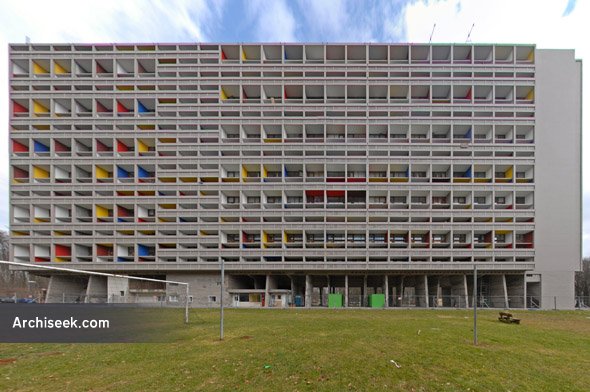 Based on the modernist residential housing design principle developed by Le Corbusier, with the collaboration of painter-architect Nadir Afonso. The concept formed the basis of several housing developments designed by him throughout Europe with this name. This plan for Firminy made provision for the construction of 3 Units of which only this was completed.

In the Unité are found the major aspects of Le Corbusier’s work: pilotis, façade libre, plan libre, sunshade, and roof deck. The pilotis open up the area to the sun and promote visual contact with the surrounding area. The east/west aspect is used to provide the maximum possible sunshine for the apartments, which are all duplex, apart from the studio flats. Originally seven interior streets served 414 different types of dwelling. Floors 18 and 19 housed the school and floor 20 was the roof deck. The school closed in 1998 after 30 years of use.