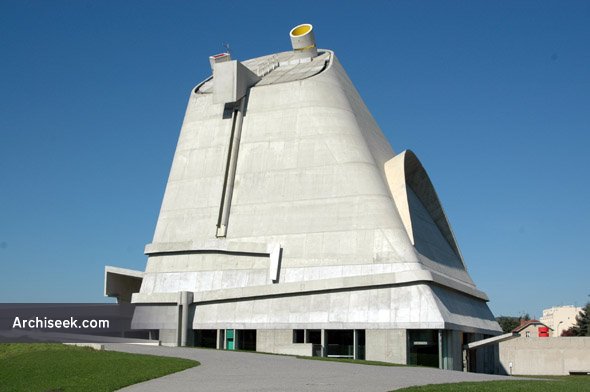 The last major work of Le Corbusier, it was completed in 2006 forty-one years after his death, by the French architect, José Oubrerie who had been Le Corbusier’s student for many years.

Designed to be a church in the model city of Firminy Vert, the construction of Saint-Pierre was begun in 1971, six years after Le Corbusier’s death in 1965. Due to local political conflicts, the first stone was laid down in 1970, but construction only began in 1973, and finally stalled in 1978. In 2002 the Communauté d’Agglomération de Saint-Etienne Métropole declared that it was of community importance to complete the monument. As the laicist French state may not use public funds for religious buildings, Saint-Pierre is now used as a cultural venue.

The building has a square base with sides of 25.50 metres in length, which expands into a truncated cone 33 metres high. Le Corbusier had designed the lower part for parish activities but it is an interpreting centre dedicated to Le Corbusier’s works. The upper part was entirely taken up by the nave with two chapels: the one used during the week with a secondary altar and the one used on Sundays with the main altar.