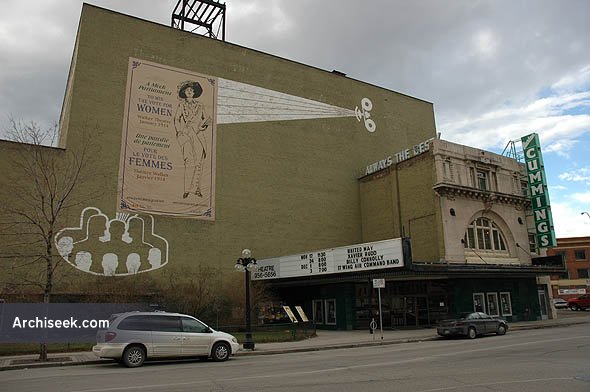 The Walker Theatre, now known as the Burton Cummings, is the city’s oldest surviving grand theatre and was built in 1905 with 2030 seats. It has been designated a National Historic site. The other surviving theatres are the Pantages (1914), and Metropolitan (1919). The Walker was modelled on the famous Auditorium Theatre in Chicago (erected in 1889; designed by Adler and Sullivan) which is surrounded by a commercial complex. Unlike the Auditorium, however, the Walker was never wrapped with its intended skin of fenestrated offices, leaving its blank main volumes exposed and only a relatively small finished facade fronting the street.

Non-theatrical events have contributed to its distinguished history, including a 1918 political meeting of the Winnipeg Trades and Labour Council and the fledgling Socialist Party of Canada, which led to the Winnipeg General Strike. The theatre also hosted debates and a mock parliament in which Nellie MCcClung took part and which advanced the cause of women’s suffrage.

Never a financial success, the City took over it as a tax payment in the 1930s. For many years it operated as a cinema.