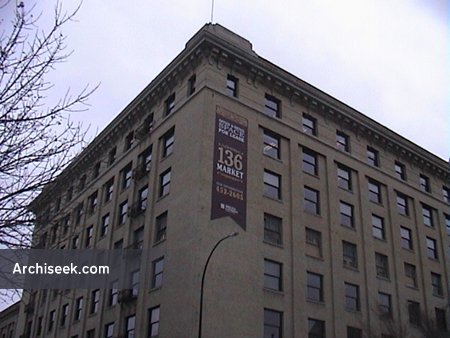 From the 1890s Marshall-Wells (a US based firm) advanced in the Canadian market by having a one man representative in Winnipeg and, then, by the construction of a warehouse on Bannatyne Avenue, in 1900. From there the company built another warehouse at 136 Market Avenue, in 1905, and a year later, extended that property. Finally in 1912 the building was extended by the addition of another four storeys.

Marshall-Wells commissioned the Winnipeg architectural firm, Hooper & Walker, to design a four-storey hardware warehouse building on Market Avenue. The firm, a partnership of Samuel Hooper, stone cutter and architect, and Charles H. Walker, draughtsman, was well known and had achieved a certain popularity and confidence among Winnipeg citizens.

In addition to a particular interest in fire safety the Hooper-Walker building bears the distinctive mark of Samuel Hooper’s talent in monumental stone work and eclectic design. The clearest indication of Hooper’s personal touch is in the elaborately carved stone entrance which frames the doorway on Market Avenue giving the building a sense of dignity and stability. This classical sense of importance and stature within the community is carried throughout the ground floor rooms, which are noteworthy with their supporting posts disguised as Corinthian capitals. It proved to be more than adequate until 1912 when the company decided to expand again. On July 24, 1912 a permit was issued to Carter, Halls, and Aldinger – designated architect and builder. An additional four storeys were then added to the 1906 building.