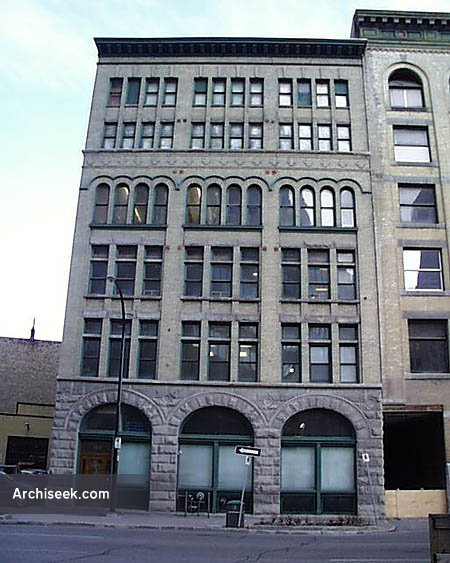 Like other warehouses on Bannatyne Avenue, the McClary Building benefited from a railway spur to the rear in what is now John Hirsch Place. Much like other Peters designs, is loosely based on the Richardsonian-Romanesque school that became so popular in the mid-western United States and Canada. The McClary Building features three large openings beneath roughly textured arches at street level. The top floor of the original building features small arches above the three sets of four window groupings. The building was later extended upwards in a similar style by John H.G. Russell. The building uses the familiar technique (especially popular in Winnipeg warehouse design) of increasing the number of windows and decreasing their size as one moves up the structure to create a certain rhythm of design. Russell continued Peters’ rhythm on the fifth and sixth floors, with three four-window groupings opting, however, to complete the final floor windows with rectangular shaped windows and projecting keystones.