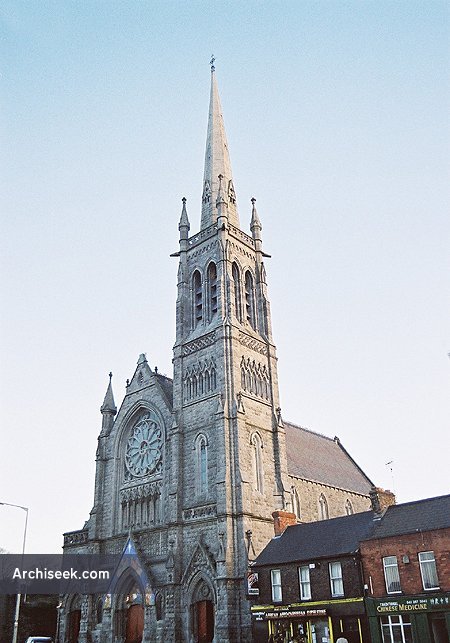 Designed by a local architect, P.J. Dodd, St Mary’s is another large Catholic church in a gothic style. The exterior is dominated by the slender tower and spire. At ground level the façade has three large gabled entrances with mouldings and carvings. The interior is richly decorated and very dark. This is due to the fact that the aisle windows (and there are only windows on one aisle) are filled with very dark stained glass so the only natural light is via the clerestory windows.

“MR. William Martin, of St. Stephen’s-green, has been entrusted with the tiling of above church, which has for some time been in course of construction, from the designs of Mr. P.J. Dodd, architect. We had the pleasure of inspecting the approved patterns, and we have not met anything better both in design and the beautiful tone of their colors. The ceramic mosaics are laid in geometrical figures, and still further show the careful attention which the makers, Messrs. Craven, Dunnill, and Co., are giving to this revived branch of architectural decoration. In front and on either side of the high altar, are represented, also in ceramic mosaics, ecclesiastical emblems, with which no doubt our readers are familiar. The centre aisle is to be laid with tiles of neat pattern, and in harmony of tone with those above-mentioned. The entire space to be covered is about 220 square yards. We have already in our articles upon the cathedrals recently restored in this city, mentioned that the tiling of their immense surfacesn have been supplied by the above manufacturers.” The Irish Builder, July 15 1883.