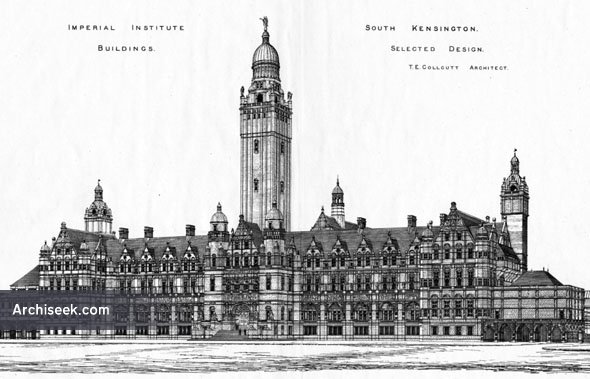 Published in The Building News, July 15th. 1887. The Prince of Wales appointed an organizing committee in November 1886. Two simultaneous meetings at St. James’s Palace and the Mansion House in January 1887 launched the fund, and on this basis the Queen’s support was published a few days later. A building committee was formed. One member was the President of the Royal Academy, Leighton. Another was Alfred Waterhouse, and it was he, an experienced assessor of competition designs, who chiefly framed that for the Institute’s building. Architects were invited to submit their names and of the 66 who did so six were chosen in February to compete. They were R. Rowand Anderson, A.W. Blomfield, T.E. Collcutt, T. N. Deane and Son, T.G. Jackson and Messrs. Aston Webb and E. Ingress Bell. Lord Herschell was pleased that among the six ‘each part of the United Kingdom was represented without the choice having been influenced by that consideration’. Each was to receive £200 for a design to be submitted within three months. The selection was to be by Lord Herschell, Lord Carnarvon, Abel, Leighton and Waterhouse.

When a contributor to The British Architect was reviewing the six competition designs for this building in 1887, he commented ‘Each architect seems to have had to fancy for himself the sort of thing an Imperial Institute should be. As the world has not yet seen an “Imperial Institute” and no one appears yet to know precisely what it is for, it seems very much like asking six Palaeontologists to furnish plans and elevations for a dodo, without supplying them with bones to evolve it from.’ The attractiveness of T.E. Collcutt’s solution was amply acknowledged both then and subsequently, but the building was to fall victim to the failure of the Institute to find a permanent role for itself, while there were those who felt even in the design a lack of confident and affirmative force

The limit of cost was £250,000, for which was to be provided a ‘fine reception hall’, a library, three reading rooms with ‘intelligence offices’, conference rooms, committee rooms, emigration offices, refreshment rooms, ‘sample rooms, connected with one or more laboratories’, and part at least of a sequence of exhibition galleries. It was recommended that large wall spaces should be left for mural pictures. Any decorative marble or wood should be from a ‘British possession’.

The directive was hardly, as The British Architect’s correspondent suspected, ‘cruelly vague’, but a committee member, Sir Henry James (later Lord James and a powerful influence in the Institute) had a clause added that ‘the Committee have not yet finally determined upon all the different objects to which the Institute may be devoted’ nor on the extent of space each might need, and the competitors’ submissions differed in approach accordingly.

Apparently by Waterhouse’s wish, the submissions were to include a perspective silhouette. The competitors were told that ‘a design in brick and stone would probably be preferred’, although the building committee did not accept the proposal to prohibit terra-cotta put forward by its trade-union member, Henry Broadhurst, a leader of the Operative Stonemasons’ Society.

Some of the designs for stone and brick seemed, nevertheless, to ask for realisation rather in terracotta, and among these improvident schemes was that of Collcutt, who in June was rewarded with success. The committee emphatically made it known that his design would require modification, but their choice was approved by the press.

Deane’s old fashioned and extravagant design from Dublin was admired but did not ‘represent British progress’ and was ‘rather too high-flown even for an Imperial Institute’: it looked more like ‘a Palace of Central Legislation’. Webb and Bell’s design also pleased: it gave great prominence to the ‘Jubilee’ aspect with a free-standing tower rather like Collcutt’s, and paid stylistic homage to Waterhouse’s own Natural History Museum sited nearby. Of the others Jackson’s looked like a college (plus a huge Flemish tower) and Andersen’s rather like a hospital. None was standard Gothic.

The critics liked Collcutt’s plan””’a simple and well-digested scheme, easily read and conveniently contrived'””and the opportunities for ‘vistas’ that it afforded. The good massing and silhouette were noted, as was the effective alternation of solids and voids, and the unity given by the unbroken roof and the binding horizontal strips and courses. The relative poverty of design in the upper part of the tower was corrected in execution, and generally the rich yet delicate detail gave pleasure. It was noticed in the finished building, however, that this detailing was not ‘of the most truly masonic character’, but was rather ‘a piece of cabinetmaking on a colossal scale’.

The British Architect thought that the lack of a piano nobile robbed the design of monumentality. The Companion to the British Almanac thought that the finished building ‘is essentially Victorian, and can only be described as charming in every respect’, and that its smallness of architectural scale was not incompatible with a grand effect. When it was in progress in 1889 The Builder pronounced it the most important building under construction in England, and potentially next in importance to the Houses of Parliament. Its final judgement was restrained. ‘That a building is entirely refined in detail and that there is absolutely nothing of bad or tawdry taste in it, is indeed much to say, and this praise the building fully merits; but we cannot call it a great or striking piece of architecture.’ The Building News thought it would not appeal to popular taste; but indeed the competition designs aroused little interest. Equally, no comment on the finished building seems to have noticed Collcutt’s idiosyncratic use of brick as if it were (in Mr. Goodhart-Rendel’s words) ‘more precious than the Portland stone’.

In 1953 the Government announced its scheme for the expansion of Imperial College. The architects’ plan was made generally public early in 1956, and a vigorous agitation was raised when it was seen that it involved the demolition of the Institute building. The Royal Fine Arts Commission had learnt of this in 1954 with regret, but felt itself hampered in formulating an alternative by what it considered the unnecessary ‘secrecy’ of the preparations. This lack of open discussion was criticized, as was the apparent overbuilding of the site. The public’s objection to the Institute’s demolition was also strong””remarkably so for a building of a style and period not then much in fashion. In June the Government announced that the tower alone would be kept and a revised scheme to permit this was published in the following month. Demolition of the rear galleries began in 1957: the east wing of the main range had been replaced by a College building by 1962, and by 1965 the west wing had been demolished. The retention of the towerhas been criticized as an unsatisfactory compromise.