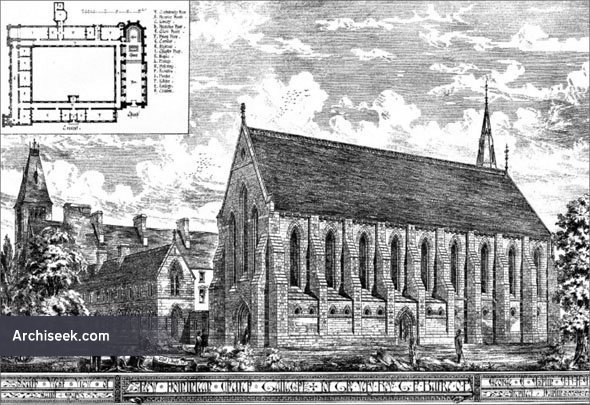 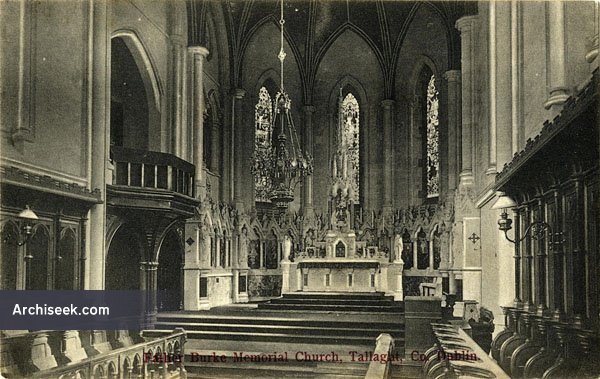 St Mary’s Priory was founded in 1855. In May 1864 the foundation stone for the Priory buildings was laid by Rev. Goodman provincial of the Dominicans in Ireland. The wing connecting the church and tower was completed in 1903, another wing and a library block were completed in 1958.

Detached gable-fronted Gothic Revival church, built by late 1886 – Cardinal McCabe laid the foundation stone of the church in October 1882, and it was dedicated to ‘The Immaculate Virgin Mary of the Rosary’ by Archbishop Walsh in October 1886, as a memorial to Fr Tom Burke, who had died three years before, and lies buried in the cloister there. Burke was a renowned preacher and one of the first three friars to live in the retreat house.

The relationship between the priory to the north and the chapel was not built as illustrated. A range that would have closed off a quadrangle was never constructed. The church has a seven-bay nave with plain lancets separated by prominent stepped buttresses. In 1969 an arcaded seventeen-bay portico and aisle was added to the south creating a T-plan church with central altar and monastic choir.

“The new buildings comprise the church and cloisters, the west wing, and the completion and alteration of east wing. The west wing was built some years ago, from the design of the late Mr. J.J. McCarthy, R.H.A. The east wing is of a very ancient date and is the only portion remaining of a large Abbey which stood on this site in the twelfth century, and which was subsequently converted into the summer residence of the Archbishops of Dublin.

The new church will be used chiefly for conventional purposes and the neighbourhood is very thinly populated. The material of the facing is the local black calp limestone, with white limestone dressings. The nave walls will be lined with brick and those of chancel and choir with Bath stone. The choir is placed behind the High Altar, according to the usage in Dominican Churches and will contain fifty stalls. A night choir is also provided over the sacristy, 42ft. by 22ft., with arcaded opening into day choir. The chancel and choir will have groined ceilings in oak, resting on trefoil corbel shafts. The nave ceiling will be waggon-headed and have arched principals.

The church is intended as a memorial to the late Very Rev. Thomas Burke, the celebrated preacher and lecturer, who was Prior of the Convent, and who died about thirteen months ago.

The contractors are Messrs. Meade & Son, and the architect Mr. George C. Ashlin, both of Dublin.” The Irish Builder, August 1 1884.

The interior fixtures were described in 1885 – “The nave, which is 70 ft. long, is flanked on either side by five side chapels 7 ft. deep, making the total width of this portion 42 ft. The high altar, which is placed in the centre of the apse, was the gift of the Royal Irish Constabulary. The canopy over the tabernacle is 32 ft. high, the whole being of statuary marble, with coloured marble shafts. The reredos takes the form of the apse and has five compartments, with three arched recesses in each for paintings of the fifteen mysteries of the rosary, and niches for statues between each compartment. It is of Bath stone, with black marble shafts. The walls of chancel and choir are lined with Bath stone, and the ceiling is groined in pitch pine. The rood screen, stalls, and pulpit are of oak and walnut, and are being executed in Dublin by Messrs. Meade and Son, the general contractors for the building. Messrs. Ryan and Son have executed the high altar and two of the side altars; Messrs. Smith Brothers the sanctuary lamp, and Messrs. McGloughlin and Sons the lead lights of windows, tabernacle, doors, and other wrought metal work.”