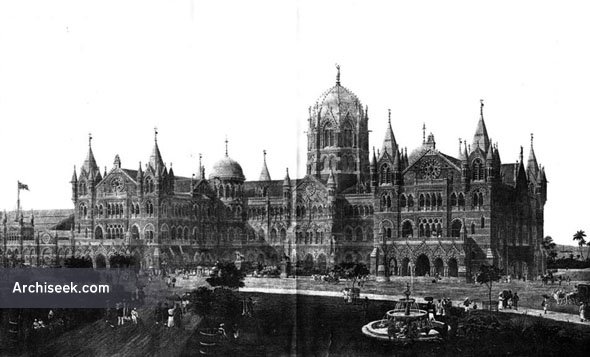 Frederick William Stevens (11 November 1847 – 3 March 1900) was an English architectural engineer who worked for the British colonial government in India. Stevens’ most notable design was the railway station Victoria Terminus in Bombay (in 1996 renamed the Chhatrapati Shivaji Terminus in Mumbai). Stevens’s name can be seen on the Terminus dedication plaque that the lead character, Jamal Malik leans against near the conclusion of the 2008 film Slumdog Millionaire.

Frederick William Stevens was born in Bath, England on November 11, 1847. He was articled in 1862, and became an engineer attached to the India Public Works Department in 1867. After a year in Pune, he was transferred to Bombay and the office of the Architect to the Government of India.

In 1877 his services were loaned to the GIP Railway for the design of the Victoria Terminus, probably the second most highly photographed building in India. The high-priest of the Indian Gothic style, he also designed the Municipal Corporation Building, the Royal Alfred Sailor’s Home, the Post-Office Mews at Apollo Bunder, the head offices of the BB&CI Railway at Churchgate, and the Oriental Life Assurance Offices at the Flora Fountain.

He died in Bombay on March 3, 1900, of Malarial fever, and was buried in the Sewri cemetery
.
Published in The Building News, October 22nd 1886.