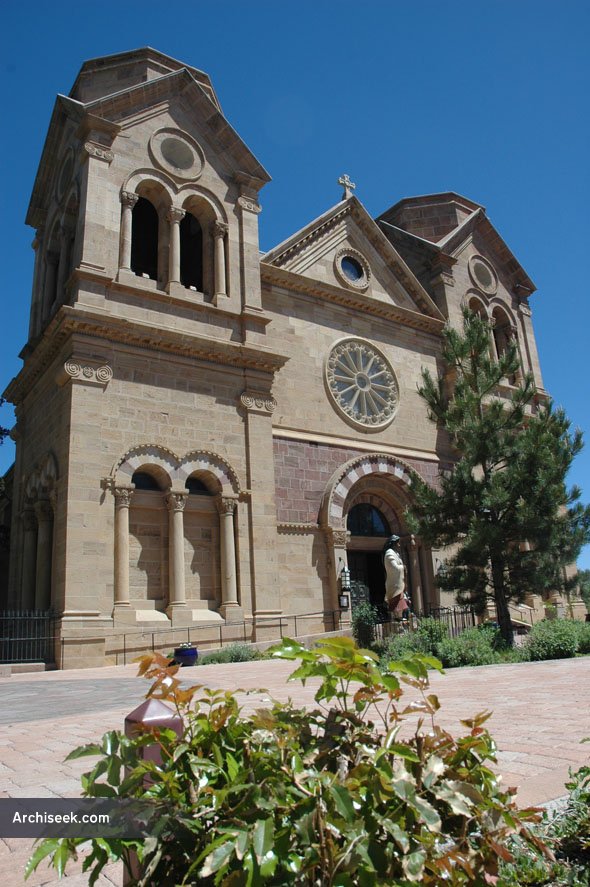 On the site where St. Frances Cathedral stands today there was originally a small mission church. That mission was burned down in the Pueblo Revolt of 1680. After the Spanish regained control in 1692, a more substantial adobe church, La Parroquia, was built on this site. That church served for almost 200 years.

Finally, in 1884, La Parroquia was replaced by St. Frances Cathedral on which construction had started in 1869. The Cathedral was built by Father Jean Baptiste Lamy, who was immortalized by Willa Cather in her Pulitzer Prize winning Death Comes for the Archbishop (1927). Lamy brought architect Antoine Mouly and his son, Projectus Mouly from Paris, France to Santa Fe to be architect-builders for the project.

The new stone Cathedral was built around and over the old church, in a curious mixture of French Gothic and Romanesque. Unfortunately it was never completed, the intended twin spires were unfinished due to lack of funds. By 1884 the main part of the Cathedral was finished and the old church was torn down from under it. The stained glass windows were created in France, traveling to Santa Fe via ship and then overland on a covered wagon.