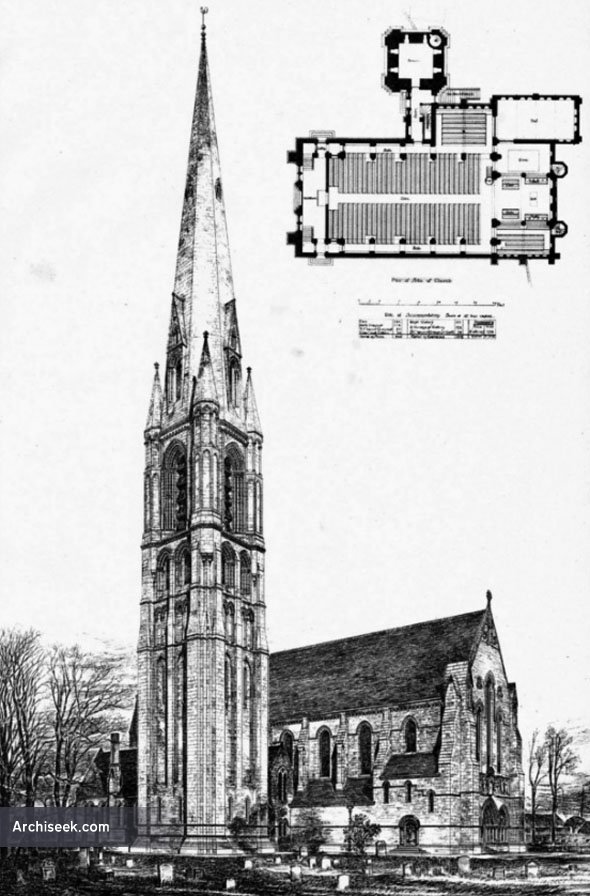 Perspective View including ground plan published in The Building News, November 21st 1884. Now known as Govan Old Parish Church, it was also known as “St Constantine’s”. Since 2007, it is no longer used for regular Sunday services, but the building remains open and is used for occasional services, including midweek services. This is at least the fourth church to stand on this ancient site. Never completed as designed, the soaring tower and spire was never constructed.

This building was dedicated in 1888 and came about in this Gothic form with its outstanding programme of Victorian stained glass as a result of the vision of Revd. John Macleod who was Minister from 1875-1898. He introduced a stronger emphasis on ceremonial and liturgical practice, looking back to medieval precedents. His scheme for the church was still more ambitious than now appears since the facade was intended to have a band of sculpted ornament and there was to be an adjacent tower and spire at the north west corner. The proportions of the interior with a broad high vaulted nave and narrow aisles reflects the influence of the Dominican and Franciscan churches, designed for preaching to large congregations, that Macleod had seen in Italy. The red and white banded stone, a medieval Italianate building characteristic much praised by the influential Victorian writer, John Ruskin, and widely adopted in Victorian Britain, adds to the splendid effect. The architect, Rowand Anderson, had designed in the gothic style for both Episcopal and Presbyterian worship.

Macleod also planned the elaborate cycle of stained glass which, though not complete, has an unusually coherent programme, even though the individual donations which enabled the glass to be made came in over a period of time. He employed five of the leading stained glass workshops of the day who drew on the inspiration of medieval and Flemish 15th and 16th century examples.