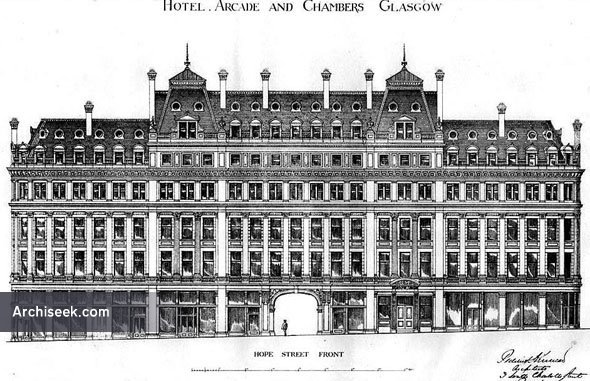 Built in a modified form without the central archway, and still in use for a varied collection of businesses. The building has two curving corners at either end.

To keep their office continuously employed, Peddie & Kinnear began building speculatively in Edinburgh from the mid-1860s. Initially these companies were primarily concerned with housing developments, but when the Caledonian Railway moved the site of its proposed Glasgow Central Station to the eastern side of Hope Street, the Blythswoodholm Building Company, backed by the Scottish Lands and Buildings Company, took over the original site on the west side for a major hotel and shopping arcade development. In this project Peddie realised some of the ideas in the unbuilt schemes for St Enoch Station in Glasgow and the North British and Caledonian Hotels in Edinburgh, but with Alexander Thomson-based elevations. By 1877 the Scottish Lands and Buildings Company had become overstretched as costs escalated and disposed of its interest to the Scottish Heritable Securities Company. Further capital was raised but in 1878 the City of Glasgow Bank crashed. This provoked a prolonged recession and in 1879 the Caledonian Railway decided to convert its offices into an hotel, bringing about the liquidation of the Blythswood Building Company and of the Scottish Heritable Securities Company in 1882 when a £70,000 bond was called in. Kinnear’s Scottish Lands and Buildings Company also went into liquidation, but it was a voluntary one and it somehow managed to remain solvent. Peddie & Kinnear’s other property companies fared no better as a result of the recession and the withdrawal of loan capital: calls for capital from companies which no longer had a value were to plague both partners to the end of their lives.