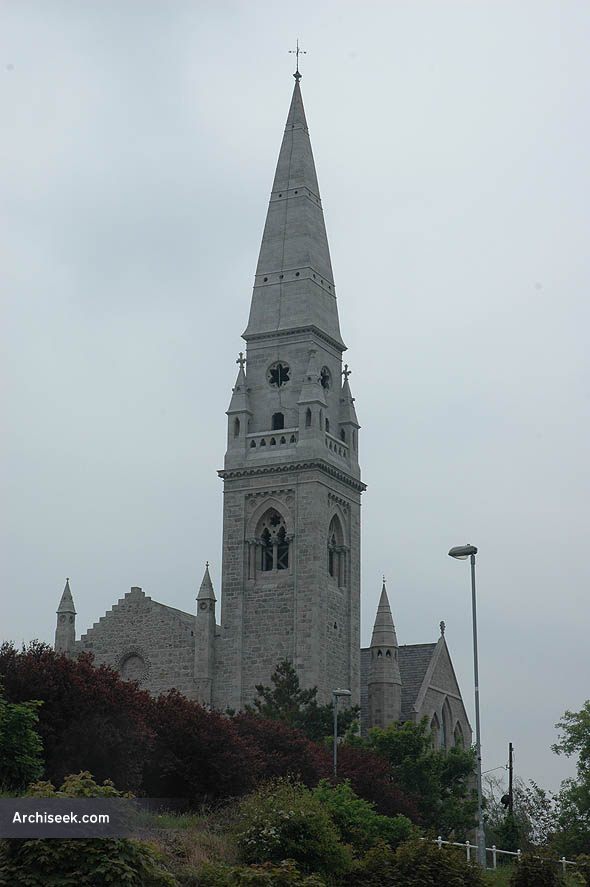 Originally the principal Church of Ireland in the town, the Mariners Church, now the Maritime Museum, was built in two stages – 1837 and 1865. The original austerity of Welland’s work was enlivened by that of Raffles Brown who added the unusual spire. A unique feature of this church is a side chapel constructed in 1960 in the shape of a ship.

The Irish Builder reported in late 1884 on recent additions and renovations – “This edifice, to which considerable additions and alterations have been just completed, was re-opened yesterday. The structure as originally designed nearly fifty years ago; would appear to have been erected and finished after various changes, by a tentative process rather than in pursuance of any well digested plan. As to the internal arrangement, it is said that the original intention was to erect two tiers of galleries, and with this a lofty open-timbered roof. When the second gallery was abandoned, the projectors appear to have taken alarm for the acoustic properties of their building, owing to its excessive height. A massive construction of wooden girders was introduced below the roof, and from this a flat plastered ceiling was suspended some 16 ft. below the originally intended summit. On the constructive lines of the lower roof timbers a ceiling of pitch pine has been built. It has massive moulded and carved principal beams, and has the effect in the interior of a flat, pitched open roof, such as is seen in later Gothic churches. This new ceiling has an elevation of 7 ft. above the old one, and has thus afforded the possibility of a new chancel arch of lofty proportions.

This chancel arch, which is 40 ft. in height, has corbelled shafts of grey marble on the responds, with clustered capitals at, springing of the arch, elaborately carved. The height of chancel to the apex of its open timbered roof, from the floor of the church, is 53 ft. It might have been more satisfactory if a deeper chancel could have been provided, its dimensions being on the plan of 23ft. by 27 ft 6 in. deep internally, but its scale of height and width is sufficient to command some architectural dignity. An existing feature of the church suggested and defined the architectural treatment and style in which the new chancel should be designed.

The three great lancet window openings which were at the chancel end of the church, had been filled some years ago with stained glass as a memorial by a member of the congregation. A gift of such magnitude had to i.e. respected, and the early thirteenth-century type of Gothic architecture lent itself most consistently to the introduction of great single lancet windows. This style has been adopted for the new chancel in all its distinctive details, and the stained glass has been reinstated in a great triplet east window, the mullions of which internally are triple groups of banded marble columns with early English sculptured capitals. On the right and left of the broad flight of chancel steps stand a new pulpit and reading-stall. The pulpit stands on an octagonal base of Cork red marble, and is itself octagonal in shape, having banded red marble shafts at each of its angles, and a sculptured cornice sur mounted with grey marble coping. This pulpit has been executed from the architect’s designs by Mr. C. W. Harrison, of Great Brunswick-street, and the sculptured foliage, &c., by Mr. C. Harrison, junr., deserve especial notice, being of high merit as a work of art.

The reading-stall, which is of Caen stone and marble, has a panelled and carved front towards chancel, and carved poppy heads on the front towards the body of the church. It is the work of Messrs. Sharpe and Emory, of Great Brunswick-street; the carving being high-class, and in harmony with that of the pulpit. It may be mentioned that the Early English carving throughout the rest of the work is by Mr. Emory. Handsome oak choir-stalls are being made by Mr. Harry Hems, of Exeter. Heating is being effected by Messrs. Maguire and Son. The organ, which was originally built, and is now to be re-erected, by Messrs. Telford and Telford, St. Stephen’s-green, will have considerable improvements and additions effected. The Communion-table, which is the gift of the incumbent, is of oak, elaborately and chastely carved by Mr. Harry Hems, of Exeter. Mr. Thomas Drew, R.H.A., St. Stephen’s-green, designed the entire of the additions, furniture, and fittings. The cost of the entire was about £2,000.”