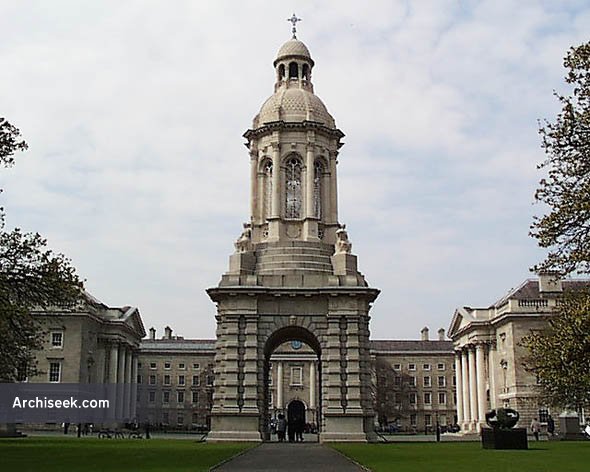 Originally intended to be linked to the buildings on either side by an “arcaded screen,” the campanile is often used pictorially to represent Trinity College. The belfry is a cylindrical chamber encircled by engaged Corinthian columns and pierced by tall round-headed openings with cast-iron traceried grilles. The four figures at the base of the belfry, sculpted by Thomas Kirk (1781-1845), represent Divinity (seen holding a cross), Science, Medicine and Law.

“The present Belfry, or Campanile, as it is usually called, is the gift of Lord John George Beresford, when Archbishop of Armagh and Primate of all Ireland, in 1852. It is an isolated monumental building in the centre of Parliament Square—an architectural composition of three stages. The lower or basement stage is square in plan, and of the Doric order, elevated on a bold podium or sub-basement of rusticated granite ashlar. Each side presents an open archway between two pairs of Doric pilasters, the pilasters being raised on pedestals, and the whole surmounted by a Doric entablature. The keystones of arches have carved heads, representing Homer, Socrates, Plato, and Demosthenes. This story is built of granite, with chamfered joints and raised panels, the alternate courses of pilasters being raised in the same manner. From the blocking of the entablature rises a stage of circular steps, the angles of blocking being occupied by pedestals supporting figures representing Divinity, Science, Medicine, and Law. From the upper step of this chamber rises the bell-chamber—circular in plan, and formed by eight Corinthian columns, attached, and raised on pedestals. The space between each pair of columns is pierced by a semicircular-headed opening, filled with ornamental ironwork. The Corinthian entablature above is broken over each column. From this level rises the dome, divided vertically by bands in continuation of the columns below, the intervals being carved to resemble overlapping leaves. This dome is surmounted by a small open lantern, formed by piers and arches; above these is a small dental cornice, finished by a smaller dome, carved like the one below. The whole is surmounted by a gilt cross. Portland stone is used from the upper circular step; the rest is cut granite. The total height is about[215]
[216] one hundred feet.[158] The gradation of the composition from the square basement to the circular belfry stage is designed with remarkable artistic ability. It is by a series of stepped courses, and the angles or “broaches” are happily filled by the sitting figures, adapted to their place with great skill by the late Mr. Thomas Kirke, R.H.A., the sculptor. The whole design, while of refined and “correct” classic detail, is of an original character, skilfully adapted to its isolated position. The architect engaged in its erection in 1852-3 was the late Sir Charles Lanyon, R.H.A., then Mr. Lanyon, and, associated with him, Mr. W. H. Lynn, R.H.A., both of whom continued to design buildings in the Roman Classic manner with skill and refinement throughout a period known as that of the Gothic revival, when this style was for a time under undeserved popular disfavour. Few architects of the day would have been found to adapt a design, with such good judgment and restraint, to the genius loci of Trinity College, and to the surrounding architecture, the work in the previous century of Sir William Chambers. The foundation-stone of the Campanile was laid by the donor, His Grace Lord John George Beresford, Lord Primate of all Ireland, who was also Chancellor of the University, on the 1st of December, 1852; and the great Bell was first rung in the new Belfry before Divine Service on Sunday, November 26th, 1854.” The Book of Trinity College Dublin 1591-1891