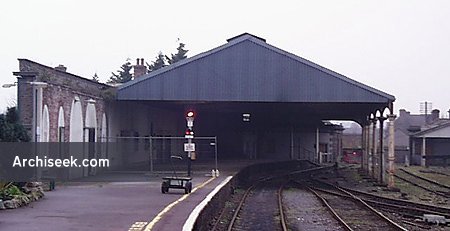 Designed by Captain William S. Moorsom and built a year later in a modified form by Sancton Wood, the architect of Heuston Station in Dublin, the old station is now in a poor state of repair. Originally a terminus station, its main façade was destroyed when the line was contined through it in 1868. This meant that for the remainder of its time as station, the main entrance was through the arcaded return façade. Ironically this line has now been dismantled and the station is a terminus once more. The station was replaced recently by a converted stone store further up the line. The original station has a fine cast iron canopy crossing the two lines over a gently curving platform. There is also a fine railway shed situated beside the former station.