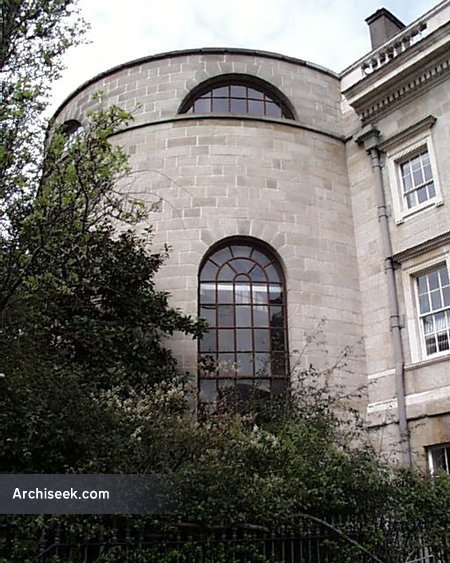 As the theatre is encased in a larger building, it was not possible to light it internally except for placing semicircular windows in the coved ceiling. These are augmented by three large round headed windows placed in the apse of the room. Like the hallway in the Provost’s House, wooden panelling is used here to suggest masonry creating a feel of solidity and mass. 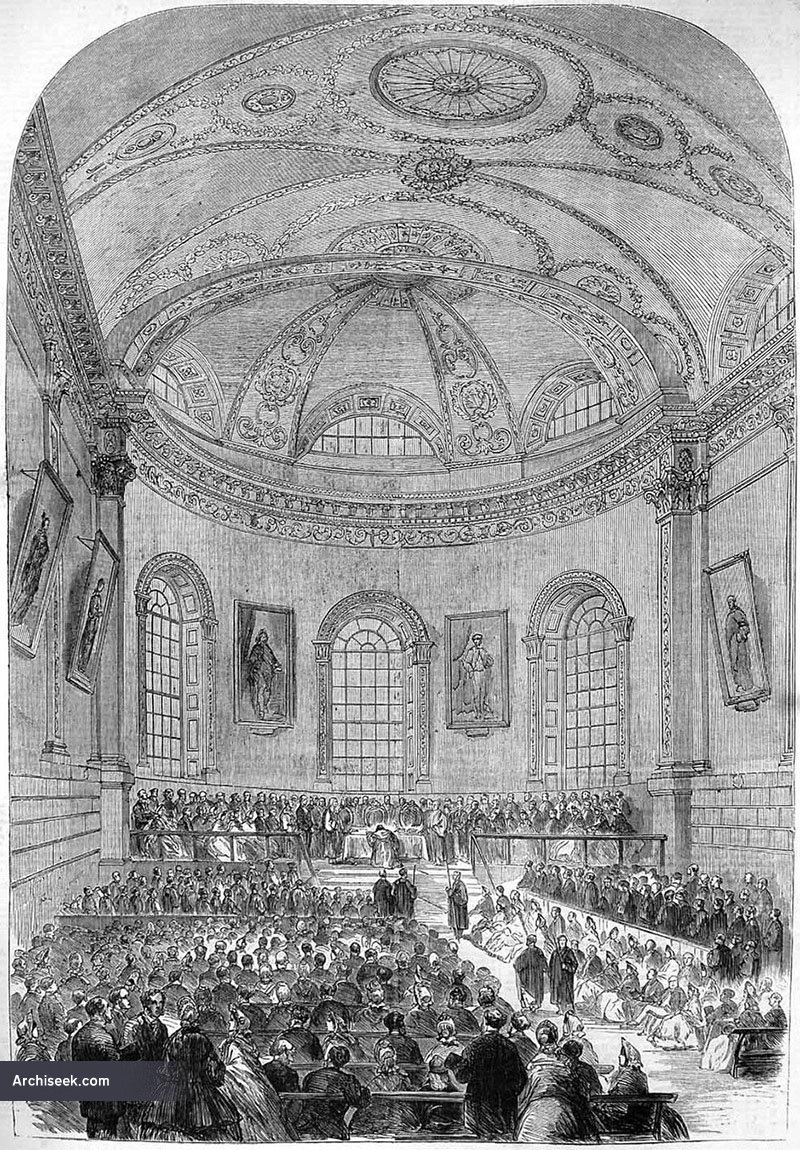 The interior contains many fine furnishings including an organ in the gallery. This came from the previous Chapel and was designed and built in Dublin around 1684. It is the oldest existing Irish made organ case and as such one of the most important in Britain and Ireland. The chandelier which is made of gilded wood came from the former House of Commons. Like the Chapel, the plasterwork is by the Irish stuccodore Michael Stapleton.

From Lewis, A Topographical Dictionary of Ireland, 1837 “The theatre, on the south side, has a front corresponding exactly with that of the chapel, and is of the same dimensions; the walls are decorated with pilasters of the Composite order, rising from a rustic basement; between the pilasters are whole-length portraits of Queen Elizabeth, the foundress, and of the following eminent persons educated in the college; Primate Ussher, Archbishop King, Bishop Berkeley, William Molyneux, Dean Swift, Dr. Baldwin, and John Foster, Speaker of the Irish House of Commons: there is also a fine monument of black and white marble and porphyry, executed at Rome by Hewetson, a native of Ireland, at an expense of £2000, erected to the memory of Dr. Baldwin, formerly provost, who died in 1758, and bequeathed £80,000 to the university.”

The Book of Trinity College Dublin 1591-1891 “The Examination Hall, or Theatre, as it is more correctly called, was designed by Sir William Chambers in 1777, and corresponds in its external appearance exactly with that of the Chapel, although its interior arrangement is naturally very different. Ten pilasters, with feeble capitals of a tasteless composite order, are disposed round the walls, standing each one singly at intervals of twelve feet on a rustic basement ten feet high, and supporting a handsome stucco frieze and bold cornice, the work of Italian artists. The pilasters themselves are ornamented with stucco scroll-work of florid Roman character. From the cornice springs the ceiling, which is also very richly ornamented in stucco, designed, modelled, and painted in the same style as the ceiling of the Chapel, by Mayers, under the direction of Sir William Chambers. In the five panels on the east side of the Hall are placed full-length portraits of Queen Elizabeth, the foundress, in her state robes; of Archbishop Ussher, Archbishop King, Bishop Berkeley, and Provost Baldwin.[153] In four of the panels on the opposite side are portraits of Edmund Burke—not by Sir Joshua Reynolds, as is usually asserted, but by Hoppner; of William Molyneux; of Fitzgibbon, Earl of Clare, by Stewart (an American artist of some reputation); and of Dean Swift. Under the centre panel is placed an elaborate monument (which is represented in the accompanying engraving) to Provost Baldwin, who died in 1758. The monument is some nine feet long and about six feet high and four feet in depth from the wall, and consists of three figures in white marble standing over a sarcophagus of dark porphyry. It is the work of a Dublin artist of the name of Hewetson, who executed it at his studio at Rome. The Hall is seventy feet long to the base line of the semicircular apse, which extends to a further distance of twenty feet, and is forty feet wide and forty-four feet high. It is lighted by three windows in the circular apse at the upper end, and by a range of small fan-shaped windows placed over the cornice. An elaborate gilt chandelier, designed to hold sixty wax candles, remarkably light and graceful in character, and which belonged to the old House of Commons in College Green, hangs in the centre of the Hall”