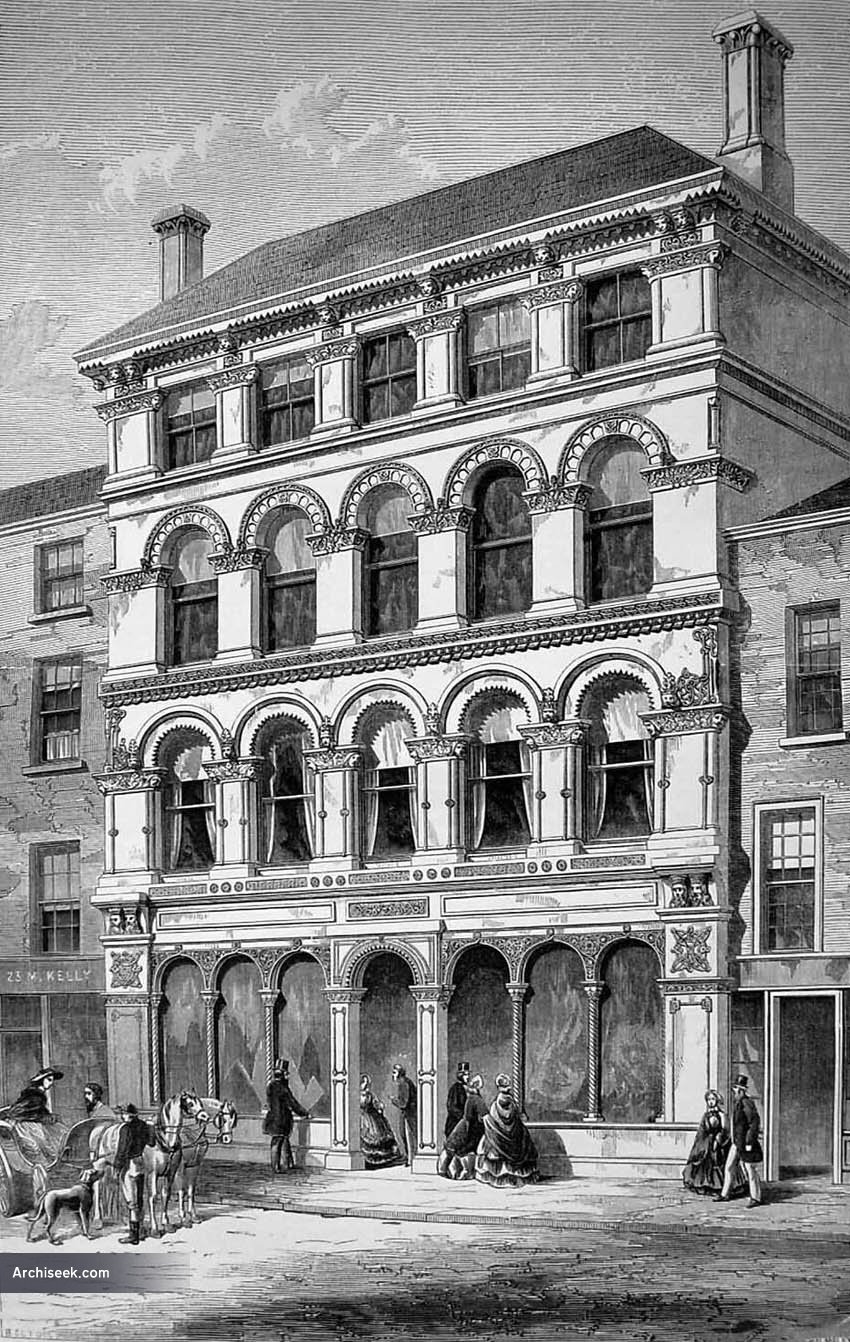 “The experiment which Mr. Digby Wyatt has tried in the design of the premises which we have selected for our principal illustration of the current week is one interesting enough to architects and archaeologists, and of real importance to Irish nationality. It is neither more nor less than an effort to adapt some of the more picturesque elements of ancient Irish ornamentation to the decoration of a structure ministering to the directly utilitarian exigencies of the present day. Few of our ” tarry at home ” readers, who may have made themselves acquainted with the essays of Dr. Petrie, or who may have examined with attention the curious cast of the chancel arch of Tuam cathedral, of the piers and circular window from Rahin church, of the doorway from Freshford, or of the remarkable crosses from Monasterboice and Tuam, which are comprised in the Crystal Palace collection of casts, can have failed to recognize the peculiar features of design which characterized the ancient monuments of Ireland”” monuments which, while recalling the traditions of classical art, in the general structural arrangements of the pier, impost, round arch, and archivolt, yet exhibit a singular individuality in every detail.

We cannot, upon the present occasion, enter into any attempt to define those eccentricities of style, frequently accompanied by successful aspirations after beauty in conventional form, which have been fully commented upon in the essays of Mr. Westwood, Dr. Petrie, Professor Donaldson, and Mr. Wyatt himself: we must rest contented, therefore, with recording our impression of the availability for architectural purposes of many of those singular types of intricate decoration which appear to have formed the pride and delight of the ancient Celtic races. It is more than probable that the present endeavour, striving to revivify such types, will stimulate many an Irish architect to attempt, upon a yet bolder scale,, to recreate a national style,””sympathising with the past, and yet identifying itself, as all national architecture should do, with the present. To Mr. Wyatt must at least be awarded the credit of having induced his client, Mr. William Longfield, of Dublin, for whom the houses have been built, to make an attempt at once novel and successful.” From The Builder, July 18 1863.