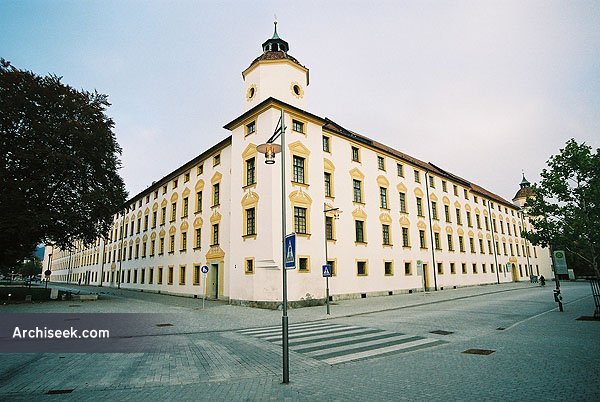 The former abbot’s residence next to St Lorenz Basilika contains two courtyards, has a small tower at each corner and turns itself inwards on the city. This is probably due to the fact that from 1525 to 1802 Kempten was divided into two parts: a Protestant Reichsstadt (free imperial city) and a Catholic Fürststift (Benedictine abbey). The former quarter, whose center was occupied by the Church of St. Mang, was independent of the larger Fürststift, which, in 1348, had been raised to the status of a principality. Accountable only to the emperor and thus hampered by tense relations with the abbey, the Reichsstadt nevertheless made a tidy living out of trade with Italy. The Residenz was the palace of the principality and features some grand interiors including a very ornate Throne Room

The exterior is unusual although not that unusual for Kempten. Many facades in Kempten have painted architectural detail – instead of moulded stucco or sculpted stonework, the window surrounds and doorways are painted on to the buildings.