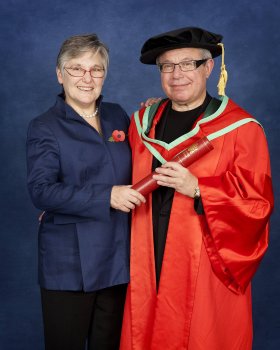 He received the accolade in recognition of his outstanding services to global architecture and design, becoming the first recipient of the honorary degree of Doctor of Fine Art (DFA), created in order to honour excellence in the fine arts. The new degree coincides with the 160th anniversary of the founding of the School of Art and Design in the city.

Accepting his honorary degree, Dr Libeskind spoke movingly of the relationship between democracy, freedom and art. “There can be no more positive and optimistic art than architecture” he said. “On a day when we remember those who died for our liberty, it is an honour for me to be here.”