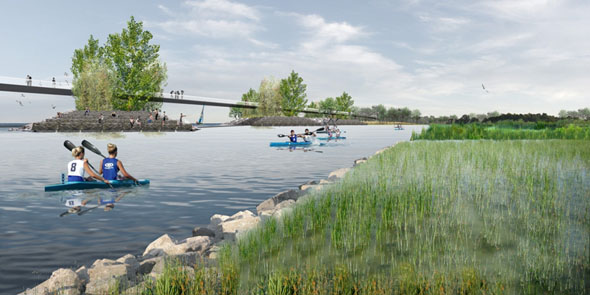 Waterfront Toronto’s Spadina WaveDeck and Master Plan for Lake Ontario Park have each been awarded 2009 Toronto Urban Design Awards. Spadina WaveDeck earned an Award of Excellence in the Small Open Space category and the Master Plan for Lake Ontario Park was awarded an Honourable Mention in the Vision and Masterplan category. The City of Toronto’s Urban Design Awards recognize and acknowledge the significant contribution that architects, landscape architects, urban designers, artists, design students, and city builders make to the look and livability of Toronto. This year’s competition drew 117 entries in seven categories. The Vision and Masterplan category honours unexecuted visions for the city, studies and master plans of high inspirational value with the potential for significant impact on Toronto’s development. The Small Open Space category recognizes spaces that provide an extension and addition to the public realm in an exemplary way.

“We’re so pleased that the City of Toronto has recognized the inspirational and transformative qualities of these two important waterfront projects,” said John Campbell, Waterfront Toronto President and CEO. “The Master Plan for Lake Ontario Park and the Spadina WaveDeck are wonderful examples of how excellence in design can not only improve our public spaces, but the overall quality of life in Toronto.”

Designed by West 8 and duToit Allsopp Hillier, the Spadina WaveDeck opened in September 2008 and was the first wavedeck built along Toronto’s waterfront. Inspired in part by the Canadian cottage experience and the shorelines of Ontario’s great lakes, the Spadina WaveDeck was designed to give urban dwellers a feel for life at the lake.

“This project expressed a clear and powerful idea that seems effortless in doing something very big – extending the public’s imagination of what Toronto’ waterfront can become in future,” said the Toronto Urban Design Awards jury in it comments.

Over the summer, the Spadina WaveDeck was joined by two new wavedecks at the Simcoe and Rees slips. Together, the three wavedecks create more than 1700 square metres of new public space along one of the most heavily used parts of the Toronto shoreline. Planning is currently underway for the fourth wavedeck at the Parliament Slip in East Bayfront.

Designed by world renowned landscape architecture firm Field Operations, the Master Plan for Lake Ontario Park presents a bold vision for transforming 375 hectares (927 acres) of Toronto’s waterfront into an urban wilderness and recreational park. The proposed park assembles a series of underutilized industrial sites, existing parks and regionally significant ecological areas into one of the most significant and exciting open space urban projects in our country’s history.

“We are delighted with the recognition bestowed upon this very important project for Lake Ontario Park by the City of Toronto,” said James Corner, Founding Principal of Field Operations. “It marks not only a celebration of high achievement in design but also a desire to see the Park become a reality sooner rather than later – creating a dramatic new lake frontage and public realm for the City and its neighborhoods.”

In addition to Toronto Urban Design Awards, the Master Plan for Lake Ontario Park and Spadina WaveDeck are the recipients of several other prestigious design awards. Earlier this year, both projects were honoured by the Canadian Society of Landscape Architects (CSLA). The Master Plan for Lake Ontario Park was awarded the CSLA’s highest prize, a National Honour Award and the Spadina WaveDeck earned a National Merit Award.

The Spadina WaveDeck also earned a 2009 Honor Award from the American Society of Landscape Architects and was the first Canadian project ever to be short-listed for the world-acclaimed Brit Insurance Design Awards.

Design excellence is a core priority for Waterfront Toronto. The organization’s goal is that everything built on Toronto’s waterfront – from buildings to streets to parks and public art – will set new standards for architecture and public space.

To help achieve and uphold its standards for design excellence, Waterfront Toronto hosts international design competitions, works with some of world’s top architects and landscape designers and incorporates urban design as an important component in its environmental assessment process. The Waterfront Design Review Panel, an independent body comprised of some of Canada’s most prestigious architects and planners also guides and informs the organization’s projects. Since 2005, Waterfront Toronto has completed several parks and public spaces projects in addition to the wavedecks. The organization started construction of Sherbourne Park in July and will start building Canada’s Sugar Beach this fall. Construction is also underway to support new communities in the West Don Lands and East Bayfront.

The Governments of Canada and Ontario and the City of Toronto created Waterfront Toronto to oversee and lead the renewal of Toronto’s waterfront. Public accessibility, design excellence, sustainable development, economic development and fiscal sustainability are the key drivers of waterfront revitalization.