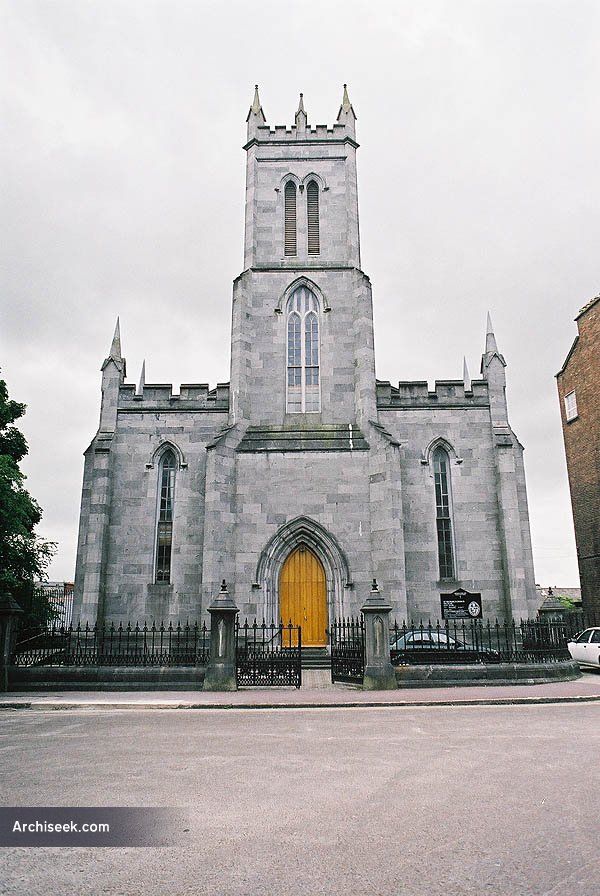 Prior to the construction of this fine Gothic church, there was an earlier Georgian church constructed with the development of Newtown Pery (the Georgian area of Limerick). Built on Pery Square, its immediate neighbour is the excellent Georgian terrace also by James Pain. Originally built in the 1840s without its intended spire, it was redeveloped in the 1870s when William and Robert Fogerty heightened the tower, added a chancel and remodeled the interior.

“This church was re-opened on the 18th ult., after the completion of various improvements, decorative and otherwise, which it has been undergoing for some months past, from the designs and under the directions of Messrs. Fogerty and Son, architects, Henry-street, Limerick. The present works are supplemental to others which have been judiciously carried out since the appointment of the present vicar, the Rev. Benjamin Jacob. The height of the tower has been increased, and pinnacles added to it. In front of the building have been erected cut-stone piers, with ornamental railings, tiled entrance floor, &c. ; these are the gift of Mr. Robert Hunt, J.P. A new chancel has been added at a cost of about i’2,000. The chancel window belonged formerly to St. Mary’s Cathedral, from which it was removed to make room for a memorial stained glass one. By the ingenuity of the architects the window was reduced in dimensions, and made suitable for the smaller church of St. Michael. The roof is of pitch pine varnished ; the flooring is laid with encaustic tiles ; the columns are of Cork red marble, with Portland caps and bases. The seats are of pitch pine, and have been painted by Mr. Cusack, of George-street, in very creditable style, and in tone harmonising admirably with then- surroundings. Mr. James Bannatyne has presented a number of brass corona? of ornate character, manufactured by the well-known firm of Jones and Willis, of Birmingham. A handsome lectern, by the same firm, is the gilt of Mr. J.M. Smallman, as a memorial to his wife. A richly-carved oak pulpit and prayer-desk are the gift of Mr. Thomas Livingston.” The Irish Builder, December 1 1877.