New kid on the block 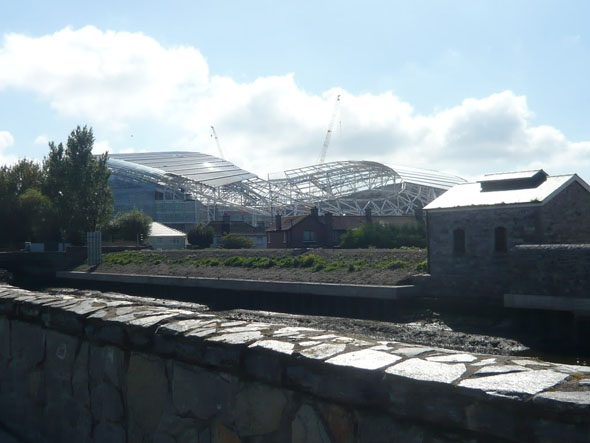 The curves and expanse of the elegant stadium roof follow a graceful dive, like the down sweep of a giant skateboard ramp. From the south side, it races from its highest point, falling towards Havelock Square and the city centre. There, it dips dramatically at the north end, where Dart travellers can catch a glimpse inside to the rising stands and to what might soon become the dominant building on the Dublin skyline.

On the south end is the area where rugby fans used to have to cross the Dart lines from Lansdowne Road Station with a grim mix of fear and exhilaration. They will soon be swept safely underground on both sides of the tracks to avoid the famous crush. Here, there is another dip in the roof, albeit more subtle, a sort of little brother to the more dramatic sag of the north end.

The Aviva Lansdowne Road Stadium is a fraternal adventure between the sports governed by the IRFU and the FAI. In its new polycarbonate cladding and steel-tube splendour, with its reconstructed hour-glass curves, it is also unmistakably younger and more feminine than the venerable but declining old Lansdowne lady, with her decaying concrete, asbestos roof and famously over-flowing urinals.

Sexy probably isn’t what Henry William Dunlop had in mind in 1872, when he set about pulling together the means for what is the world’s oldest international rugby venue, one that represented the sport’s prudent and conservative values.