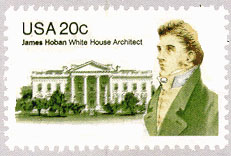 James Hoban was born in Desart, near Callan, County Kilkenny. Having studied architecture at the Dublin Society School, he emigrated to the United States and soon established himself as an architect in Philadelphia. is entry for a presidental house in Washington D.C was the winning entry and was based on Leinster House in Dublin. This was reduced to a two storey design for reasons of economy at the behest of George Washington. From 1793 to 1800 he oversaw the work of construction. During the war of 1812 the building was attacked and burned leaving only the charred shell standing. Restoration work under Hoban’s supervision was completed in 1817. James Hoban died in Washington D.C. on December 8th. 1831.

Since it’s restoration in 1817 the White House of Hoban’s design has been enlarged by the addition of the North and South Porticoes and also the West and East Wings. In the 1980s he was honoured by stamps issued simultaneously in Ireland and the USA.