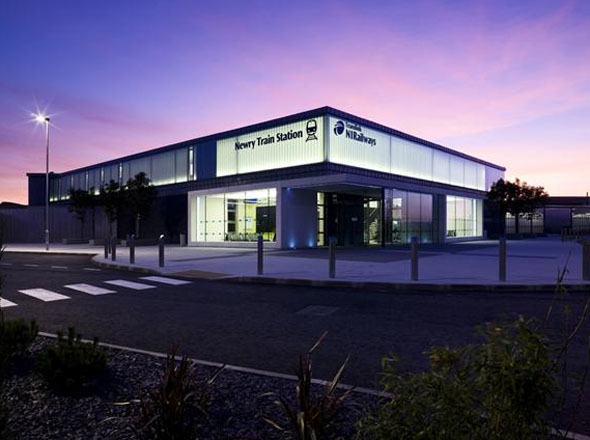 After a 14 year wait, Newry finally has a new train station designed by Robinson McIlwaine Architects Often referred to as Northern Ireland’s “˜Gateway to the North’, due to its location on the Northern Ireland/Republic of Ireland border, Newry had first proposed upgrading its ageing station back in the mid-1990s. In 2002 the need for a revamp became even more pressing after Newry gained city status. However the project was slowed down by numerous studies into the location of the station, in particular its distance from the city centre and the difficult surrounding topography.

The brief called for a new purpose built station, platform upgrades and a 300 space “˜Park and Ride’ facility. Robinson McIlwaine also included a relocation of the station, a new pedestrian bridge and major road improvements in the surrounding area. According to the Belfast-based practice, the design was inspired by the “˜contemporary “˜European’ box aesthetic in a response to Newry’s new found classification as a city while “˜acknowledging the unique relationship between buildings and landscape, in particular to the mountains beyond’.