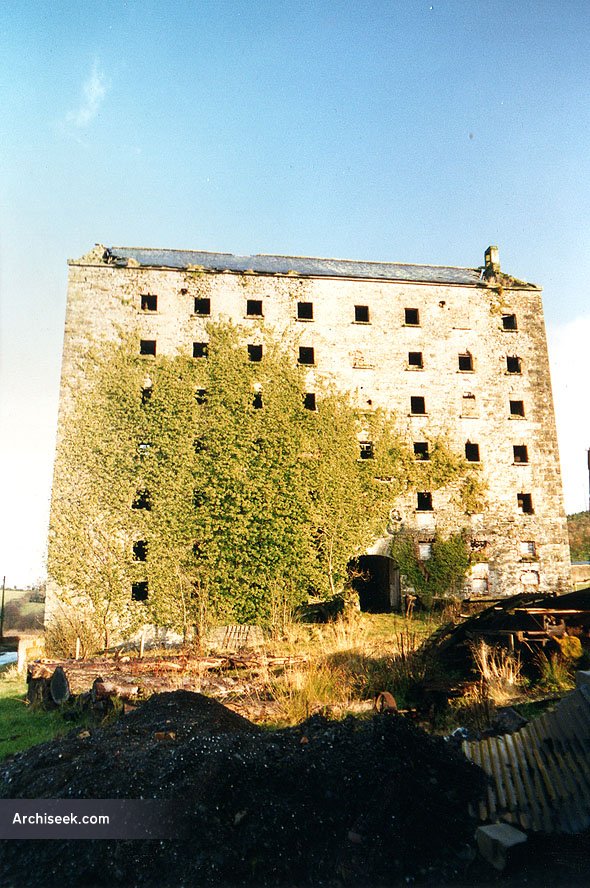 Corrigan’s or Emy Mill is located about a half mile to the south of Mullan. This impressive ten storey mill was probably built as a spinning mill originally. This building subscribes to Mc Cullough’s statement in relation to the industrial heritage of Ireland: ‘Despite the frequent incidence of early industrial buildings in the Irish countryside, they have little place in a cultural consciousness whose healthy, but selective memory, has ordained for us a common agricultural past. Mills, warehouses and barns are often the biggest objects in the landscape, yet they are invisible as monuments through their absence of detail and, paradoxically, through their scale, for which the eye has no reference in the language of formal architecture’. The sheer size of Emy Mill , along with its’ regularity of windows and composition of stone with no architectural detail increases its imposing nature and its likeness to a cartesian grid. The main structure of Emy Mill housed a corn mill for many years after the collapse of the linen industry. Then it specialised in hayrakes and coffins for a number of years. Demolished.

Emy Mill is shown on the 1835, 1858 and 1907 OS maps. It was probably erected in the early1800s (possibly the early 1800s (possibly the 1820s according to Lewis). The 1859 valuation house book notes that it was built in two sections, that at west being newer than the rest of the block. This section is first shown on the 1858 map, indicating that it was probably built in the 1840s or early ’50s (Archiseek has ‘averaged’ out the date to 1845). By 1859, the ‘old’ mill, in the east part of the block, was only used occasionally in winter. In the ‘new’ mill, an 11ft dia x 25ft wide waterwheel with 48 buckets drove four sets of millstones. Maize (Indian corn) was being ground at that time.