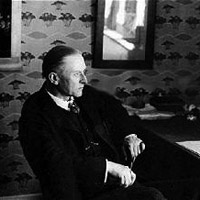 Charles Francis Annesley Voysey (1857 – 1941), an English architect and furniture designer, was one of the first people to understand and appreciate the significance of industrial design. He is considered as one of the pioneers of Modern Architecture and is particularly noted for his design in English domestic Architecture. His designs of which were influenced by the ideas of Herbert Tudor Buckland (1869 – 1951) and Augustus Welby Northmore Pugin (1812-1852).

Born at Kingston College, at Hessle, Yorkshire on 28th May 1857, he studied with J.P. Seddon until 1874, studied for a year under George Devey, and established his own practice in 1882. By 1894 he practiced from Melina Place, St John’s Wood, London, next door to Edward Schroeder Prior, resulting in the development of a long term friendship and exchange of ideas between the two men. Voysey’s early work was as a designer of wallpapers, fabrics and furnishings in a simple Arts and Crafts style but he is renowned as the architect of a number of notable country houses.

His houses featured white rough rendered walls with horizontal ribbon windows and huge pitched roofs, and are recognised for their simplicity, originality and total abandonment of historical tradition. His style and works are considered formative works in the evolution of the Modern Movement in architecture – although Voysey himself abhorred the idea, having a strong dislike of “modern” architecture, and especially of its use in England.

Examples of his completed architectural works are: Perrycroft, Colwall, Herefordshire 1893; Annesley Lodge, Hampstead, London, 1896; Merlshanger, Hog’s Back, Guildford, 1896; Norney, Shackleford, 1897; Spade House, Sandgate, Kent (the home of the writer H.G.Wells); The Pastures, North Luffenham, Rutland 1903; The Orchard, Chorleywood, 1900, which he designed for himself. There are several examples of Voysey’s design near Bowness-on-Windermere, Cumbria, with roughcast walls and massive rendered stacks on sweeping slate roofs.