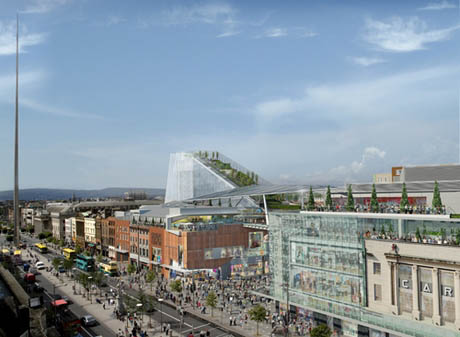 The proposed €1.25 billion redevelopment of a 5.5 acre site centred on the former Carlton cinema on O’Connell Street, could “serious and irreversibly” undermine the character of Dublin’s main street, An Bord Pleanála has been told. The appeal hearing on the development which includes a four-storey “park in the sky”, a branch of British department store John Lewis, almost 100 shops, 64 apartments, and 2,868sq m of offices was opened by An Bord Pleanála yesterday. Developers Chartered Land told the hearing that the scheme would make a “positive and powerful contribution to the city as a whole”. The developer’s architect Mark Turpin said the area was considered by many to have become unsafe and had “suffered stagnation over a long period” but the proposed scheme would transform the area and regenerate what was the “civic spine” of Dublin. The development area bounded by O’Connell Street, Moore Street Henry Street and Parnell Street would include three new public squares, two new streets, and would involve the relocation of two protected structures: the 19th-century O’Connell Hall, and the facade of the former Carlton cinema. The Georgian Society of Ireland told the hearing that it strongly opposed the relocation of the protected structures, and the insertion of a new plaza on O’Connell Street. The society’s assistant director Emmeline Henderson said the plaza would “detract from the 18th-century urban form” of O’Connell Street and “compromises the existing civic spine”.