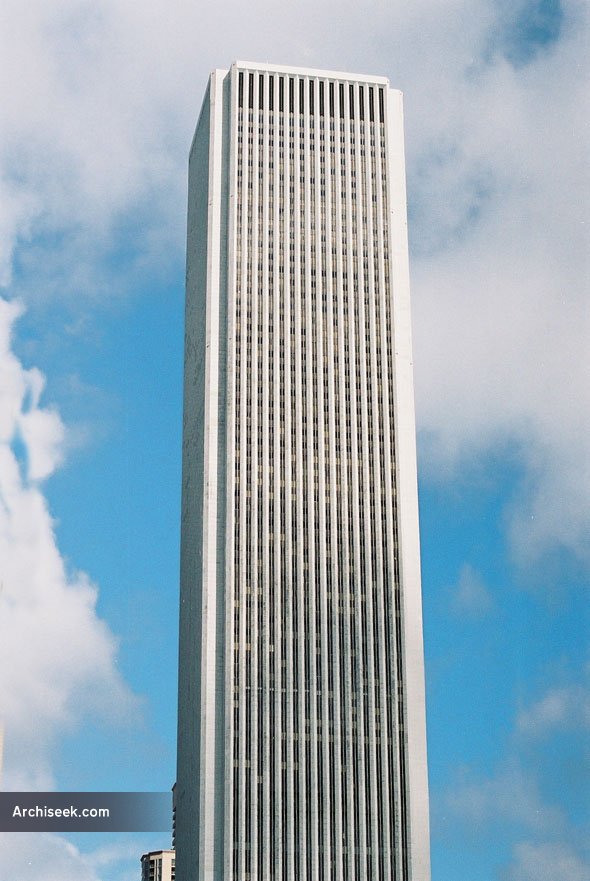 The Aon Center (formerly the Amoco Building, Standard Oil Building or “Big Stan” as the building was often called) is one of the tallest in the world at 1136 feet and 83 floors. Not many years ago it was the tallest building in Chicago – from 1973 to 1974 until it was surpassed by the Sears Tower. When the building was originally built, it was the world’s tallest marble clad building. Eventually, the Carrara marble that sheathed the building began to buckle and fall off the building. From 1990 to 1992 the building’s 43,000 marble cladding panels were replaced by two-inch-thick Mt. Airy granite panels at a cost of about $80 million.

The building employs a tubular steel-framed structural system with V-shaped perimeter columns to resist earthquakes, reduce sway, minimize column bending, and maximize column-free space. The building is the only regular “box-shaped” building in the world over 300 meters tall and the tallest building in the world without any major antennae, spires, or finials at the top. Each side of the building has 15 vertical bands of black windows, recessed between triangular white piers.