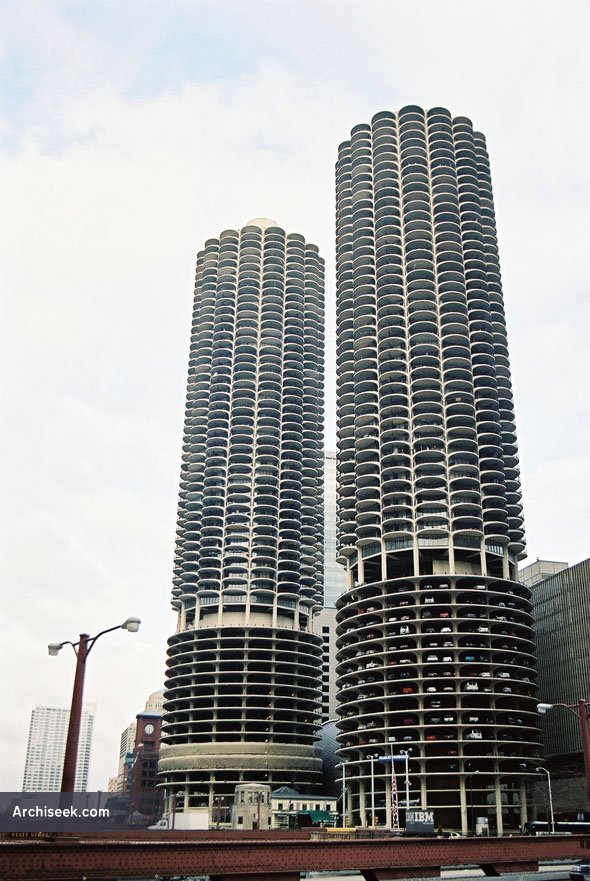 Sitting on a three-acre site, Marina City is referred to as “the city within a city,” as there is a 16-story office building inside; a 1,750-seat theater and a 700-seat auditorium; a grocery store, restaurants, bowling alley, gymnasium, swimming pool, skating rink; a marina for 700 small craft, and a sculpture garden at the base of the towers, all of which overlook the Chicago River.

When the buildings were built, the 60-story pedal-ringed towers were the tallest concrete structures in the world. Marina City”s creator, Betrum Goldberg attributed these words to the structure: “Our time.., has made us aware that forces and strains flow in patterns which have little relationship to the rectilinear concepts of the Victorian engineers. We have become aware of the almost live quality which our structures achieve, and we seek the forms which give the most life to our structures.”

It culminated thirty years of thought and development for Goldberg. Each of the twin, sixty-story towers had four hundred and fifty apartments in its upper two-thirds, with the lower third a continuous parking ramp that spirals upwards, accommodating four hundred and fifty automobiles. Since the residential level starts at the twenty-first story, magnificent views of the city are enjoyed from every apartment. The towers are as popular with Chicagoans as the ‘corn on the cob’ they are caricatured as in Goldberg’s office.

The Creator’s Words
“…From the lesson of making steel flow under heat, pressure and impact into a new form he ‘became aware, at a sensitive level, of the fact that strength can come from shape rather than weight. If you deform a piece of sheet steel you have a sculptural form with a new moment of inertia, where shape can give strength. In the automobile, designers have been decreasing weights of steel while producing increasingly stronger forms. Produced automatically and endlessly, but in straight lines, the rolled steel forms we were working with from my Miesian background became a very clumsy tool. Whereas we had been talking for years about the machine in architecture, as part of the old Bauhaus tradition, it had more potential than anything we had given it credit for. We could virtually build anything we could imagine. The post-and-beam suddenly became a hangover from the Victorian tradition where the machine had been an expression of the human arm at work, from left to right and up and down. I felt almost like a primitive looking at the machine that could create a material by a process that did not exist before””produce a magic that was not there before.”
“” Bertrand Goldberg. from Paul Heyer. Architects on Architecture: New Directions in America. p49, 50-51.